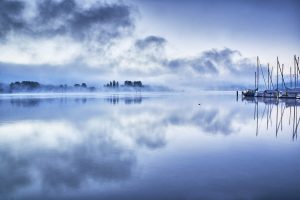 How do our ponds and lakes stay clean? As it turns out, we have the Sun’s ultraviolet rays to thank for that, but with waters becoming murkier due to run-off and pollution, it’s no longer guaranteed. Now, one study has taken a closer look at how pollution is preventing the Sun from doing its job of destroying potentially harmful pathogens (Jotham, 2017).

Researchers from Miami University in Ohio studied water samples based on previous models created by the National Center for Atmospheric Research (NCAR) to draw their conclusions (Williamson et al., 2017).

“Although the ability of solar UV to inactivate waterborne pathogens has long been recognized, the importance of this nexus of precipitation and dissolved organic matter-mediated reductions in water transparency and solar UV inactivation of pathogens has not previously been quantified,” the researchers stated. “Here we examine the evidence for this link by first highlighting recent literature on the sensitivity of waterborne pathogens to the UV in natural sunlight.”

To begin their study, the researchers knew that they needed to be able to quantify the effects of solar UV rays on the pathogens in lake water. They also had to be able to gauge the sensitivity of pathogens to UV rays and whether they could be destroyed by them.

After examining the water samples from previous models, they found that the clarity of lake water greatly varied. This was to say that while some areas were “browned out” by pollution, other areas were clear, meaning UV rays could still penetrate some areas of lakes. However, their analysis showed that over time, there has been a growing amount of run-off and pollution in these bodies of water. This means that technically, it is becoming more challenging for UV rays to do their job of cleaning up the pathogens.

“This study is a first step and further empirical surveys and experimental studies are needed to confirm the importance of solar UV inactivation relative to other environmental controls of pathogen abundance,” the researchers concluded. “Environmental data collected under natural solar radiation conditions that include spectral attenuation in the water column across environmental gradients of temperature, pH, and other important regulators of pathogen survival are necessary to identify the complex interactions that will ultimately regulate pathogen abundance in surface waters.”