It’s not a surprise that the apiary field, and honey, has a pretty decent economic impact. After all, without bees to pollinate many foods, we’d be in terrible shape. That’s why when the bees started to decline, the CDC opened a dialogue between a variety of academic fields to get a full scope on what the impact of the loss of bees would be and different solutions that could be brought to the rescue if the bees were to die out. Without having a clear estimate of honey bees’ services, it is difficult to see just how much the apiary field impacts their daily lives. It isn’t just the farmer who relies on the bees, but also the end consumer that buys the products of honey and the fruit and vegetables they pollinate.

The Problems of Assessing Economic Impact

Assessing the economic impact of bees is not as easy as you might think. First you’d have to take into account what food is pollinated by the bees (mostly fruits and vegetables), the products that come directly from honeybees (honey, beeswax, etc.), the people who make their living off bees, and even the sales made at stores that sell to the various products to consumers. Further considerations would include the industries that produce medicines that prevent diseases from killing off the hives. Finally, the impact that honeybees have on a crop is masked by other variables, such as soil nutrients, pests, and microclimates in any given place and year.

Researchers at the University of Florida  took a survey of their state, asking for responses to surveys of the various scales of business. Hobbyist to big operations, stationary to migratory beekeepers responded. The response was a start.

For reference, it costs $125,000 for 3000 hives if a person wants to have a commercial beekeeping operation . That being said, the cost of building a single hive for a small farm or a backyard is not expensive nor difficult. That’s why a large majority of beekeepers (94%, according to Chisel’s research), are considered hobbyists with 1 – 25 hives.

But what about the rest of the United States? That was the question that James Chisel’s economic thesis. Chisel  recommends a model that takes into account the transaction markets between beekeepers and farmers for pollination, the value added for the health of the crops, the products of honey and wax products, the secondary market such as cosmetic goods, and finally externalities such as freelance honeybees or those that are freely lent to a neighbouring farmer so the bees produce honey. This all comes into the formula: 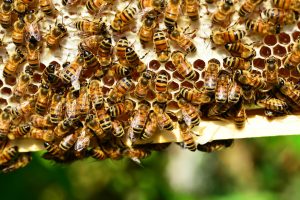 A model based on some core things of the market are all well and good, but there is a singular threat that has been creeping into the subconscious of the industry: Adulterated products.

Any time there is a high value product, there will be a market for “dupes” or as demand increases while product decreases, it will be thinned out. During WWI, plaster was mixed with flour to “stretch” the flour supply, and corn syrup, beet sugar, or gluten has been added to honey in the past .

Economic adulteration is often caught by testing the products to see if they are up to standards. For example, stable isotopic ratios will be able to detect if corn syrup was added to the honey if it is over 7% of the honey. Fairchild et al surveyed different levels of the honey industry to find out if they tested for such adulteration, how much of a problem it was, and if they were concerned about it.

What they found was interesting. They did test for adulteration in the late 1990s, and 71% of firms that sold honey found that honey was adulterated with corn syrup (no other adulterants were found). Of course, this was reflected in the those surveyed felt that this was an important problem in the industry.

The economics of the honey industry is muddled at best. But it’s also clear that the services and products the honeybees provide are quite valuable. Beyond this many people rely on the honeybee directly or indirectly for their livelihoods. Hopefully we will never have to find out through trial and error just how much we relied on these complex insects.