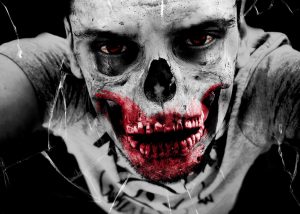 If a real-life zombie apocalypse broke out, would you prepared to take on the undead? Most of us know at this point that zombies are a work of fiction, but scientists wanted to determine if humans could actually fight off the creatures in a worst-case scenario.

A study published in the University of Leicester’s Journal of Physics Special Topics now looks at how long it would take zombies to take over the world. The researchers estimated that each zombie would have a 90 percent success rate at finding and infecting one human per day. This would make the zombie virus twice as contagious as the Black Death (or plague) of the 1300s.

The researchers also determined that each zombie could live up to 20 days without brains. A noticeable impact would likely take approximately 20 days to be seen as well. Without geographic isolation, the human population would drop to about 273 people (from about 7.5 billion) by Day No. 100.

In this case, the researchers examined the S (the susceptible population), Z (the zombie population) and D (the dead population), and suggested that the average life-cycle of a zombie would be S to Z to D.

However, these numbers shouldn’t be strongly relied for a few reasons, aside from the fact that it regards fictional zombies. The study did not take natural birth and death rates into account. The researchers also did not take mankind’s ability to fight back.

In terms of “real-life” zombies, a certain tetrodotoxin can create a zombie-like sensation in humans. When an individual is poisoned, he or she may appear to be dead. When the poison wears off and the individual rises from the grave, it creates a “zombie-like” situation.

When too much of the tetrodotoxin is taken, an individual can die. However, it remains a critical part of some cultures in the Caribbean today. Those who practice religions, such as Santeria and voodoo, believe in magic and witchcraft – some of which involve the undead.

Our Average Lifespan Just Increased, But Have We Reached the Ceiling?

Soon, Hair May Be Enough to Convict a Suspect of a Crime