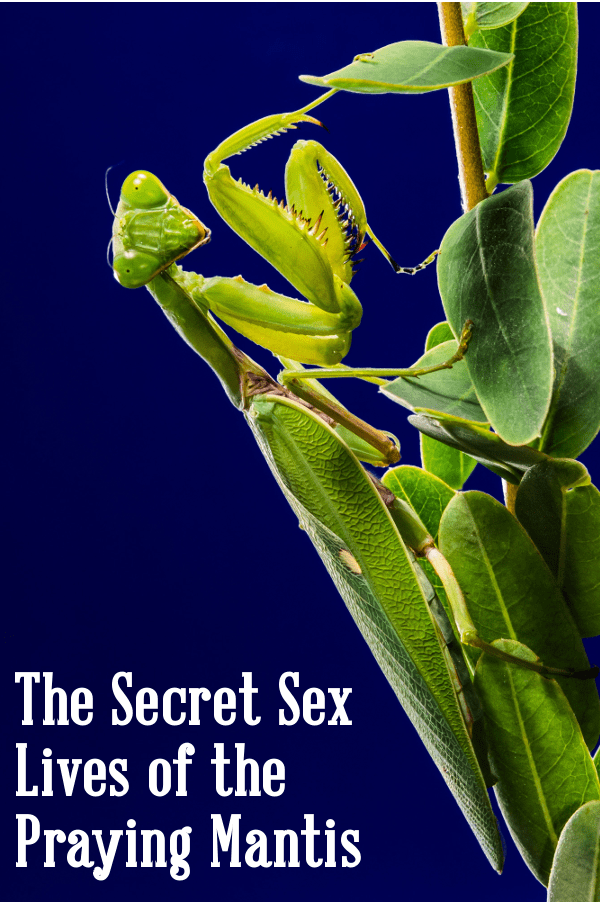 Sex is risky business for male praying mantis. One of the most recognizable members of the insect world, with its triangular head, long body, and forearms that look like they are folded in prayer, the praying mantis is anything but pious. Females of the mantodea order are often seen as ruthless, cold-blooded seductresses because they engage in a practice known as sexual cannibalism. During mating, they often bite the head of their lover. And they don’t stop at just simple decapitation. They continue eating the male’s body while he is still mating with her. Although it seems needlessly violent and bizarre, the secret of the praying mantises sexual cannibalism is that it is advantageous to the continuation of the mantodea order.

It has been well-documented, for quite a long time, how the female praying mantises dine on their mates during reproduction. But what researchers didn’t know is that this activity occurs less frequently in nature than it does in the laboratory. The stresses and hungry females, living in an over-crowded cage or terrarium, devoured the hapless males the majority of the time they were mating. Observed in their natural environment, however, the sexual cannibalism took place only about thirty percent of the time…much better odds for the males!

In the controlled environment of a laboratory, the male and female praying mantises don’t get to choose their lovers. They are stuck with whatever mate the scientist pairs them with. In the wild, however, the males are a bit choosier. They seemed to be attracted to larger, plumper females, perhaps because they appear to be well-fed and less hungry. They also gravitate toward females who appear to be less aggressive. Both will increase his chances of surviving the mating with is head intact. It seems the male praying mantis isn’t as stupid as we first thought.

The act of beheading during sex may seem self-defeating, but scientists have observed that the male praying mantises urge to mate is not controlled by his brain, which tastes delicious. The urge to copulate is triggered by a mass of nerves in the abdomen of the male. That means, the male still has the instinct to mate and continues on with his mating activities even after he has been decapitated. 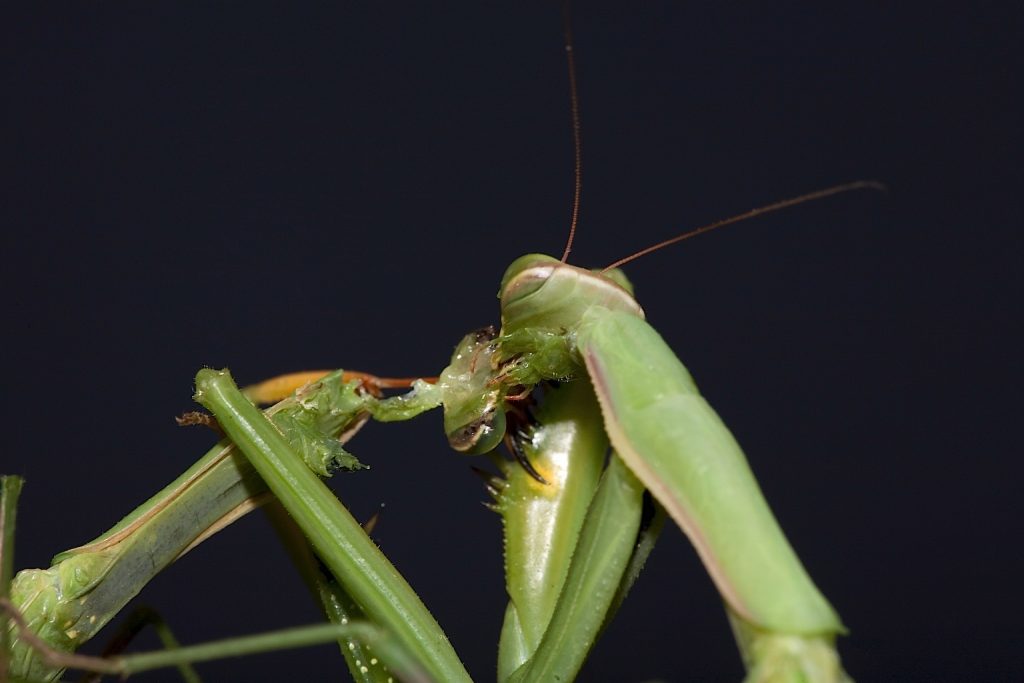 Why the sexual cannibalism takes place in praying mantises is still a mystery to scientists, but their research is getting them closer to an answer. The evidence they have uncovered seems to indicate that the death of the male in his lover’s embrace is not an act of betrayal, but a means to ensure the prosperity of his progeny. As reported in George Dvorsky’s article, “Why Female Praying Mantises Devour Their Partners During Sex,” a recent study by William Brown of the State University of New York at Fredonia, suggests that female praying mantises that cannibalize their mates during sex actually produce more eggs then matings in which the male survives unscathed.

To determine the connection between the sex and the cannibalization, Brown and his team first placed traceable radioactive amino acids into crickets, then fed the crickets to a group of male praying mantises. Each male was placed with a female praying mantis and the researchers waited for things to heat up the terrarium. In half of the couples, the researchers swooped in to save the male after mating but before the female had a chance to dine on her lover. In the second, half of the test couple, the male may have gotten lucky, but he wasn’t so lucky in the end.

After their night of debauchery, Brown and his team traced the path of the radioactive amino acids through the females’ bodies and made some startling discoveries. First, the cannibal females produce more eggs – about 88 – then their non-cannibalistic counterparts, at only 37.

Although people have long considered the female praying mantis to be a sort of black widow…a heartless female who murders her lover in cold blood…and the males as being so blinded by their lust that they rush headlong into danger. But recent studies are beginning to disprove this. Rather than portraying the female of the mantodea order as wicked and wily, we are now starting to view the males as devoted fathers that make the ultimate sacrifice to give their children the best odds of survival. Still, sexual cannibalism is an odd way of accomplishing this goal.

Greatest Dads of the Animal World

Soon, Hair May Be Enough to Convict a Suspect of a Crime