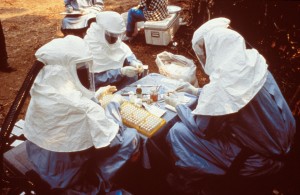 Microsoft Founder Bill Gates wrote an opinion piece for the New York Times that went live on March 18, and itÂ provided plenty of food for thought onÂ the recent Ebola crisis. Stemming from the health crisis, which took thousands of lives in West Africa, Gates proclaimed that the world is simply not ready to deal with a global epidemic.

The billionaire-turned-philanthropist proclaimed that an epidemic could kill 10 million people around the world in the coming years. That being said, it should be relatively unnerving to the average person that our planet is extremely unprepared for such a disaster. Gates cites instances such as the Spanish flu in his piece, which took the lives of 30 million people in 1918.

So now thatÂ everyone is terrified, what shouldÂ we do?

Gates tactfully writes that “ingenuity and innovation” may be able to spare us all. For example, a global warning and response system for outbreaks could help. This could begin by viewing facilities such as clinics as part of the larger infrastructure for combating future epidemics. The trained medical professionals at these facilities would monitor disease patterns over time and alert the public to any looming disasters.

Disease surveillance is another suggestion made by Gates. This goes beyond asking medical professionals to stay alert — it would involve training everyone from local leaders to military members to be prepared to respond.

Now the question is whether any of this will really happen — the epidemic, the death, or the research it will take to remedy the entire situation.

Are We Really Unprepared to Handle the Inevitable?

Ebola undoubtedly brought out some of our worst fears when the outbreak began in West Africa. Much of it led to hysteria here in the U.S., but what are theÂ realÂ odds of a disease overtaking our country (and our planet)?

As it turns out, the odds are pretty good. Over the past 40 years, several new infectious viruses have been discovered by scientists. Microbes are constantly changing their genes to avoid the defenses of human immune systems as well.

Health officials believe that another influenza pandemic, similar to the Spanish flu, is inevitable. Although we haven’t seen one yet, there have been signs of the potential. For example an H5N1 strain of the flu killed 1.4 million birds in 1997.

Now, youÂ couldÂ run and hide in your home for the rest of your life. Or, you can have a little faith in humanity — specifically the scientists and researchers — who are working around the clock to tackle these issues before theyÂ arise. Of course, it’s challenging to believe in the existence of solutions that don’t exist yet.