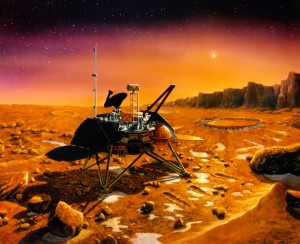 A Mars habitat may not be far off in the future, but could the chances slip away if we blow up the planet? Tesla Creator Elon Musk doesn’t think so.

While chatting with Stephen Colbert onÂ The Late Show,Â Musk stated that nuking the red planet may be essential to creating a place for humans to live, according to ExtremeTech. More specifically, this process would induce rapid climate change and speed up Mars’ evolution process. Think of it as terra-forming to a large, unimaginable degree.

“It is a fixer-upper of a planet,” Musk told Colbert, referring to Mars as a potentially habitable place. “At first, you’re going to have to live in transparent domes. But eventually, you could transform Mars into an Earth-like planet. You warm it up. The fast way is [to do it is by] dropping nuclear weapons over the poles.”

Of course, most people wouldn’t want to be on Mars while its climate is still evolving (and nukes are being dropped). However, the prospect may be slightly exciting to those like former Astronaut Buzz Aldrin, who has been pushing for Mars exploration for years.

The ‘Need’ for Mars Exploration

If Musk is looking for support, he’s got it from Aldrin, who has been advocating for trips to the Red Planet for quite some time. Most notably, Aldrin posted an image of himself on Twitter in front of Stonehenge back in March 2015, wearing a shirt that stated, “Get Your Ass to Mars.” However, he’s very serious about promoting Mars exploration.

Aldrin wrote an opinion piece for CNNÂ back in 2014 that pushed NASA for more interest in Mars.Â He hasn’t let up his efforts, and it’s also worth noting that in his article, he ironically stressed the need for commercial intervention.

Our space program should not focus on getting back to the moon. We have already blazed that trail. Apollo was part of a clear, get-there-in-a-hurry, space race strategy. To be blunt, that meant we didn’t spend time developing re-usability.Â It’s time for commercial and international interests to move, beyond discovery, to development.

So will he team up with Musk? There’s no telling if that will happen, or if Musk’s plan to blow up the Red Planet will come to fruition. In any case, it looks like people are taking the fourth rock from the Sun more seriously these days.