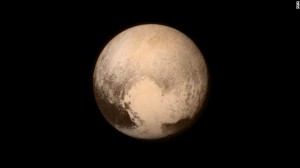 Ever since we decided to kick Pluto out of our model of the “perfect” solar system, the dwarf planet has been relatively forgotten — until now. Close-up images of Pluto started being released by NASA during the week of July 13 after the New Horizons spacecraft took some snapshots during a flyby. Additionally, New Horizons went offline (intentionally) for 12 hours to collect data from Pluto and its five moons, according to CNN.

The spacecraft’s journey marks humankind’s first flyby mission of Pluto. Now, the world is suddenly interested in the little dwarf planet all over again, and for good reason.

Photos of the planet revealed some interesting discoveries. For instance, there is an ample amount of snow – yes, snow – on Pluto’s surface. Scientists believe this is due in part to the planet’s strong atmospheric cycles. Pluto’s equator also appears to have a range of mountains. They are close to 11,000 feet high, which makes them comparable to the Rockies in the U.S., according to The Guardian.

There is also a section of the planet that has been seemingly “paved over.” Scientists say that this indicates recent geological activity. The most plausible explanation is geysers blasting ice into the atmosphere. However, researchers aren’t ruling out cryo-volcanoes — think volcanoes, but with ice instead of lava.

The mountains across Pluto are thought to be formed from water ice, and they have a coating of methane and nitrogen. Water ice is known to be strong enough to hold up large mountains. This is the first time that these types of mountains have been seen on a planet, rather than a moon.

New Horizons was able to see plenty of Pluto’s largest moon, Charon, and its exotic terrain. Cliffs and troughs stretching across 600 miles were captured in photographs. Scientists believe that these could be signs that the moon’s crust is beginning to fracture.

In total, the mission of the spacecraft has taken about nine years to complete. Unfortunately, Pluto was removed from our official projection of the solar system back in 2006. Will these new photos reinvigorate the world’s interest in Pluto? Furthermore, will it be enough to reinstate it into our model of the solar system?

There’s no word yet, but in the least, the dwarf planet has raised some eyebrows. As more gorgeous photographs stream into the public’s hands, I have my fingers crossed for the little guy.

The Life and Death of Cassini, the Saturn Probe