If you’ve been enjoying spring weather in your region, you might have forgotten all about climate change. A new study reveals that you’re not alone — many people are experiencing warm, comfortable weather, and it’s due to our shifting climate. However, the conditions aren’t going to last, according to scientists. 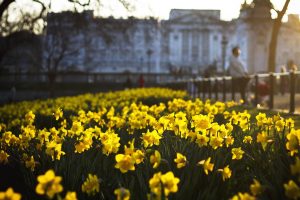 A piece published in Nature has found that in the U.S., we’ve been experiencing pleasant weather full of sunshine and warm temperatures as of late. Specifically, researchers discovered that compared to the past four decades, we’re experiencing some of the best weather we’ve ever seen. Mild winters have been the hallmark of this weather pattern. However, scientists note that the surprisingly manageable winters are usually followed up by uncomfortable summers, and this particular trend is bound to continue.

“Climate change models predict that this trend is temporary, however, because U.S. summers will eventually warm more than winters,” the authors wrote in their report. “Under a scenario in which greenhouse gas emissions proceed at an unabated rate, we estimate that 88 percent of the U.S. public will experience weather at the end of the century that is less preferable than weather in the recent past.”

This means that we’re bound to feel the heat, so to speak, in future summers. It comes in exchange for warmer winters, and of course, global warming.

When you’re outside experiencing bright sunshine and moderate temperatures, you probably aren’t worried about rising sea levels, if at all. Furthermore, basking in the sunlight doesn’t exactly spark a cause for concern linked to global warming in most individuals.

“Whereas weather patterns in recent decades have served as a poor source of motivation for Americans to demand a policy response to climate change, public concern may rise once people’s everyday experiences of climate change effects start to become less pleasant,” warn the authors of the report.

A study published in the Proceedings of the National Academy of Sciences of the United States of America earlier this year found that there is a 95 percent chance that the 20th century sea level rise was faster than any of the previous 27 centuries.

Williams, Casey. “It’s So Nice Out, No One is Worrying About Climate Change.” Huffington Post. Published April 22, 2016.