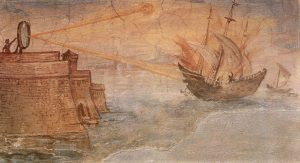 Legends from antiquity talk of two different weapons used in warfare, Greek fire and the Archimedes death ray. In fact, both of these weapons have been mentioned in some of the popular medieval fantasy books, movies, and television series, like Game of Thrones. But what exactly were these two cool-sounding ancient weapons and could they have really worked?

Both Greek fire and the Archimedes death ray were incendiary devices. According to the ancient accounts, Greek fire, developed in 672, was a substance that was easily ignited. Once lit, it burned extremely hot and could even stay burning under water. It was used by the Byzantine navy to defeat their enemies and, in fact, Greek fire is credited with making the Byzantine military extremely powerful. Archimedes death ray was the creation of the Greek mathematician and inventor Archimedes that he developed to protect his home of Syracuse from the invading Roman navy in 214 BC. It was, by all descriptions, an enormous mirror that focused the sun’s rays into a lethal lazar that igniting the approaching enemy ships.

We know much more about the Archimedes death ray than we do about Greek fire. Archimedes left sketches and notes that were replicated by other authors in their writings. But Greek fire was entirely different. Because the substance was so powerful, the formula for making it was closely guarded.

Even today, we do not know for sure what Greek fire was, but the textual evidence from the ancient writings gives us some clues. One of these works was The History of Rome by the noted historian, Titus Livy. In this work, he wrote that a torch of Greek fire could be plunged underwater and stay burning because it was, as he said, it was made of “sulphur mixed with lime.” What he meant by lime was most likely quicklime, or calcium oxide, a substance that was known to the Byzantines and the Arabs at the time. While it is true that calcium oxide is easily ignited, it does not burn with the intensity that Greek fire was said to have.

Other accounts of Greek fire mention “thunder” associated with it. That bit of information has led some to speculate that Greek fire may have contained a gunpowder-like material called saltpeter, which is a potassium nitrate compound. The trouble with this theory is that there is no collaborating evidence that saltpeter was ever used anywhere in Europe or the Middle East before the 13th century.

In yet another ancient text, Tactica, written by Emperor Leo the Wise, there is mention that Greek fire was a liquid substance that was poured all over ships’ decks. Then the wooden ships were set ablaze by a flaming arrow that was shot from shore. This may indicate that Greek fire was some sort of petroleum based product, perhaps even napalm. The Byzantine Empire included spots in the Middle East where crude oil could be found. The petroleum may have been mixed with pine resin or tar that would help sustain the flame and burn hotter.

Still another theory about the makeup of Greek fire states that the weapon could have been made using calcium phosphide. This substance could be produced by ancient people. They would just need to boil urine and crushed bones in a sealed metal pot. The fire would have to be very hot in order for calcium phosphide to be produced. Although calcium phosphide can combust when it comes in contact with water, this fire burns quickly and less intensely than Greek fire.

The Archimedes death ray was not a chemical substance but a device. A creative inventor, Archimedes built his death ray to repel the invading Roman legions and protect the city-state of Syracuse. According to legend, the death ray captured the rays of the sun and refocused them into an intense beam of energy that was powerful enough to cause approaching Roman ships to burst into flames. Further descriptions indicate that the Archimedes death ray was probably a large mirror that could reflect the sun’s rays toward the enemy ships and set them on fire…a larger version of how kids set fire to dry leaves with a magnifying glass. But could this concept really work to the degree of effectiveness that was described?

The TV show, Mythbusters, twice tried to replicate the power of the Archimedes death ray. The show’s hosts arranged numerous smaller mirrors in a concave pattern so as to direct the sun’s rays to a distant point. Both experiments failed and the Mythbusters declared that the Archimedes death ray was busted. But some students at MIT thought that they knew why the Mythbusters experiments failed. In 2005, they conducted their own experiment that was slightly different. The students determined that if they used a series of flat, not concave mirrors, they could produce a stronger, more powerful beam of light. In the experiment that the MIT student conducted, they were able to reflect a beam that reached 1100 degrees Fahrenheit and caught wood on fire from a distance.

Does this mean that the Archimedes death ray was a real ancient weapon? Perhaps not. The weapon that the MIT students made did not function as well as the legends of the Archimedes death ray. It took them a full ten minutes of focusing the ray on a single point before fire was produced. That would be extremely difficult to do with a ship bobbing on the waves and manned by alert sailors who could move the vessel out of the way.