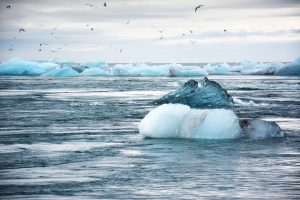 What will happen when Greenland’s Petermann glacier finally begins melting at a rapid rate? What about portions of Antarctica? The natural assumption is that sea levels will begin to rise, but now, scientists believe that there are strong variances in how cities will be affected.

Researchers Eric Larour, Erik Ivins and Surendra Adhikari recently came together to determine exactly how some of the world’s largest cities will be impacted by ice melting in different places around the globe (Larour, Ivins, & Adhikari, 2017).

“We exploit an advanced mathematical property of adjoint systems and determine the exact gradient of sea-level fingerprints with respect to local variations in the ice thickness of all of the world’s ice drainage systems,” they write in their report. “By exhaustively mapping these fingerprint gradients, we form a new diagnosis tool, henceforth referred to as gradient fingerprint mapping (GFM), that readily allows for improved assessments of future coastal inundation or emergence.”

Together, the researchers created a formula to map ice thickness changes into sea-level “fingerprints.” By taking both of these factors into consideration, the scientists believed they could fully determine the global mean sea level at a specific location. They populated a list of 293 port cities around the globe to see how they would be impacted by the tide.

Interestingly, some cities appear that they would be greatly affected by a rise in sea level if portions of Greenland or Antarctica were to melt, while others missed the cut. In some cases, the sea level could hypothetically drop, depending on where ice melts and breaks off from its point of origin.

“So far, sea level fingerprints have been used in an ice-centered way, for instance to compute how a given amount of melt from a specific ice source will affect sea level change worldwide,” Riccardo Riva, a researcher who studies sea level at Delft University of Technology, told the Washington Post (Mooney, 2017). “The authors are reversing the viewpoint, examining how much a certain location is affected by ice melt from different ice sources, and this provides a much better risk assessment by highlighting the ice sources that will have the largest impact.”

So what was the end game for the researchers? They hope their information can help lead the way in terms of long-term coastal planning.

“Application of GFM by planners and decision makers will improve on the existing state of the art by enabling improved high-resolution quantification of the sensitivity of local sea level evolution to global cryospheric changes,” they conclude.

The Weddell Polynya is Back in Antarctica, But Why?