In antiquity, there lived a plant called silphium that had powerful culinary and medicinal uses … including the most effective birth control ever known. Although highly sought after, the plant refused to be cultivated by man, and was eventually harvested into extinction, so the ancient writings tell us. All that is left is textual evidence and some crude sketches. Today, botanists aren’t even sure what kind of plant silphium was. Or if it really did go extinct. To learn more about this ancient botanical mystery, we need to start at the beginning, in the centuries before the birth of Jesus Christ, when silphium grew wild outside the city of Cyrene in Northern Africa in the area that is now Libya, and analyze the few clues that remain to help solve this ancient botanical mystery. 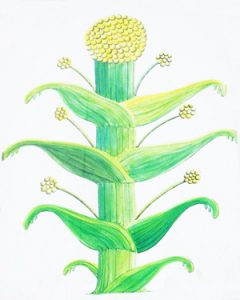 Most botanists believe that silphium was either a variety of the giant fennel plant or a type of parsley. According to oral legends that were written down long after the fact, silphium started growing near Cyrene after a black rain fell in the region. According to a Greek legend, the plant grew in a place known as Apollo’s Fountain, so named because the local tribes claimed that there was a hole in the sky in that area. This was probably because Cyrene received much more rainfall than surrounding areas, and the area was lush and green, in stark contrast to the nearby deserts.

Silphium starting showing up in historical texts around the 7th century BCE. As its importance grew, so did the economy of Cyrene. Cyrene became the richest city in Africa and a well-known tourist destination. The plant was featured on the city’s currency and both the Egyptian and Minoan cultures created a petroglyph specifically for silphium. It was a staple of culinary and medical use for 700 years, until the plant was harvested into extinction around the 1st century BCE. In his work, Natural History, Pliny the Elder writes that the last known stalk of silphium was picked and presented as a gift to the Roman Emperor Nero, who promptly ate it.

A few descriptions of the plant remain in ancient texts. It was said to have short, thick leaves, tiny yellow flowers, and bulky, vigorous roots. The sap that oozed from the silphium plant was particularly aromatic and medicinal, at least by ancient standards. The wonder drug of its day, silphium was said to cure such maladies as tooth decay, warts, dog bites, stomach ailments, coughs, leprosy, and anal growths. But it was more valued for its use as a contraceptive…more specifically as an abortifacient. Ancient medical texts all repeat the claim that a pessary made of silphium sap was effective at “purging the uterus” to “bring forth menstruation”, all clever euphemisms for drug-induced abortions. In a society that placed a high value on legitimate heirs and a low, low value on bastard children, silphium’s became highly sought after as the first “morning-after” pill.

Aside from its contraceptive uses, silphium was used as an aphrodisiac. Drinking the juices of the silphium stalk increased the libido, according to Roman songs, poems, and literature. Crude depictions of the plant on coins of the day show us that the seed pods were heart-shaped, leading many cultural anthropologists to claim that the ancient Greeks and Romans took the heart shape as a symbol applied to love and romance.

Because silphium grew in such a limited area – a long, thin patch of land approximately 125 miles long by 35 miles wide – strict controls were in place to limit the number of plants harvested at a time. Naturally, many people collected the seeds of the silphium in an attempt to cultivate their own home-grown variety, but the plant resisted domestication. All attempts to grow the plant elsewhere failed. Therefore, when greedy silphium users over-harvested the plant to sell on the black market, it was easily plunged into extinction.

While it may be impossible to definitively identify silphium, there is some modern consensus that the plant was a member of the Ferula genus. When silphium died out in the first century, it was replaced with Ferula assafoetida in culinary and medical uses, though it lacked that contraceptive qualities of silphium. Perhaps the lost herb was replaced with the plant that was the closest in appearance to it, so the theory goes, making the giant fennel a contender. 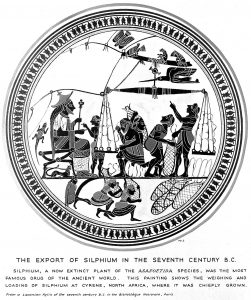 Perhaps the biggest clue to this ancient botanical mystery can be found in the accounts of the failed attempts to cultivate silphium. The Greek scientists Theophrastus, who is considered to be the father of botany, wrote about his frustrations when trying to grown silphium from seed. One observation he made was that the plant grew best on disturbed soil. Several kinds of plants thrive on disturbed soil, including poppies and purple loosestrife. One reason is that the soil is less compact, allowing more light to penetrate the top layers. Another reason is that there are less competing plants if the soil had recently been dug up. Still another reason could be that the chemical make-up of the soil changes when it has been disturbed, making for more desirable conditions of some plants.

Modern botanists have looked at other wild plants that cannot be cultivated to see what other theories can be gleaned. The huckleberry plant, for example, grows wild in the woodlands and mountains of North American, but when it is grown in captivity, it does not yield fruit. The huckleberry required a complex combination of soil nutrients and growing condition and relies on neighboring plants to supply these. When grown in a homogenous environment, it does not thrive or produce fruit. The same could be true for silphium. It may need to grow alongside other plants to be viable.

Another intriguing theory states that silphium could have been a hybrid, a natural cross between two other plants. Nature has a way of controlling hybridization. In animals, the offspring are sterile. In plants, while the product of a hybridization may yield the desired results, the seeds of these hybrids produce unpredictable results with wildly varying traits. For many wild plants, however, this second-generation melt-down is avoided because the hybrid plant does not reproduce by seed, but by root. More specifically, they spread by root-stock. They are cloning or duplicating the hybrid parent each time a new plant grows from the existing root-stock, avoiding a succession of generations that would alter the genetic stock.

Nature provides us with a living example of this process. Iris albicans, known as the cemetery iris because it is often placed on the graves throughout the Middle East, where the plant grows wild. The cemetery iris is sterile and has been proliferating for thousands of years from the original root-stock. Silphium could be a hybridization that spread its roots throughout a patch of land near Cyrene. But since the root was as highly prized as the stalks, leaves, and flowers, harvesting too much of the roots would have spelled the end for the plant. There is textual evidence that this occurred. Pliny the Elder wrote that so many people coveted the plant that the people of Cyrene were forced to fence off the entire strip of land on which it grew. But black marketers tore down the fencing and took large quantities of the plant. Local farmers snuck their sheep into the meadow to allow the animals to graze on the silphium. Mutton from silphium-fed sheep was exceptionally tender and tasty, and fetched a higher price at the marketplace. The livestock could have over-grazed silphium, which was already being depleted by the black market smugglers. The combination of these two factors meant the end to the plant.

All may not be lost, though. New plant species are identified every year and a complete plant diversity survey of Libya has not yet been done. Silphium, either in its original form or a descendent of the original, may still be quietly growing near Cyrene. It could be hiding in plain sight since we don’t know exactly what we are looking for. The ancient botanical mystery may be solved after all.

The science of plant systematics

Bradford Pear: A Lesson in Toying with Invasive Species

Giant Hogweed: The Invasive Plant that is Causing a Scare