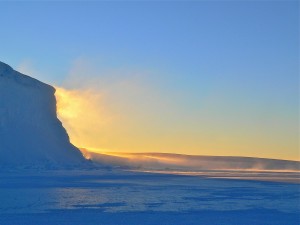 Editor’s note: This article is an example of fortune telling in science. These ideas are based on models with constantly moving targets, and with accuracy based on best assumptions and worst case scenarios. There is no way to tell the future, and scientists do not have a crystal ball that is more accurate than any soothsayer.

You might not have plans to visit Antarctica any time soon, but this critical land mass on our planet is in danger of disappearing within the next 90 years. Research has found that the ice shelves of Antarctica are melting at a rapid rate, and soon, it may soon go the way of the dinosaurs, according to The Guardian.

Scientists published their work in Nature, and their conclusions weren’t exactly positive. The amount of Antarctic-wide melt is expected to double by 2050, meaning that you may even be around to see the devastating effects.

“Antarctic ice shelves have undergone widespread and accelerated thinning and retreat in recent decades in response to coupled atmospheric and oceanic forcing,” wrote the authors of the report.

The melting is a realistic possibility that isn’t just something that our children and grandchild will have to confront. Soon, we could all be facing rising sea levels that threaten some of our most prominent coastal cities.

However, there is a glimmer of hope within all of this research. For starters, we could slow down the melting by reducing our greenhouse emissions before 2050. Having more control over the situation is definitely better than watching the ice shelves collapse by 2100, which is what we’re headed toward unless changes are made.

In short, it’s possible to put on the breaks. However, the window of opportunity to do so is undoubtedly closing.

Why Antarctica Matters (Really, It Does!)
You might already be asking yourself why it matters if Antarctica and its ice shelves survive, especially if you aren’t concerned about rising sea levels. The fact of the matter is that Antarctica has served as one big lab for our world’s scientists for decades, and it continues to give us glimpses into what the planet was like more than one million years ago.

Antarctica has also definitively helped us understand how humans are impacting Earth. It was here that a hole in the ozone layer was discovered, indicating the damage done by chemicals in 1985.

More than 30,000 people visit Antarctica to experience life in the wilderness each year. You may not be one of them, and you might not even have a remote interest in science. However, Antarctica is indisputably valuable to those who are invested in conserving the planet where you live.

Press Association. “Antarctic ice is melting so fast the whole continent may be at risk by 2011.” The Guardian. October 12, 2015.

The Weddell Polynya is Back in Antarctica, But Why?