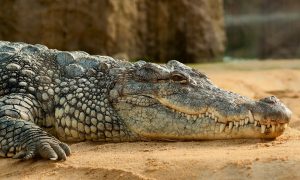 Alligators are a normal part of the scenery for Floridians, meaning it shouldn’t have come as a shock when a species of crocodile started making its home in the state. However, not everyone is happy with the new creature residing in Florida, which comes all the way from Africa.

In Nile crocodile, as it’s called, can typically be found in sub-Saharan Africa. It can grow up to 21 feet in length and weigh as much as one-and-a-half tons. For this reason, Floridians are a bit shocked to see it in their neck of the woods. It also doesn’t help to hear that these creatures will eat just about anything, including humans.

Thus far, four Nile crocodiles have been found in the state. None of them were fully grown, but one was tagged. Two years later, it turned up 18 miles away from its initial spot, having grown to more than five feet long.

“The state of Florida has more introduced herpetofauna than any other governmental region on Earth,” write the authors of the report, highlighting the existence of Nile crocodiles in Florida. “Four species of nonnative crocodilians have been introduced to Florida (all since 1960), one of which is established. Between 2000–2014 we field-collected three nonnative crocodilians in Miami-Dade County, Florida, and one in Hendry County, Florida.”

Of course, it would be ideal to remove the non-native species from the state, but it may be challenging to play catch-up after what has already begun in the region.

“Distinguishing exotic crocodilian species from native species is difficult and we recommend the USFWS require a clearly identifiable photograph of a non-native crocodilian before authorization for lethal take is granted,” the authors continued. “We suggest that state and federal wildlife agencies coordinate policies regarding capture and transport of protected species outside their native range to facilitate rapid response efforts to remove introduced species.”

Non-native species are also known as invasive species. The National Wildlife Federation states that 42 percent of endangered or threatened species are at risk primarily due to these creatures.

In many cases, invasive species arrive in unnatural habitats due to factors out of their control. Some made travel via ships or wooden products. Others may be transported through ornamental plants. In any case, it helps to learn more about the invasive species in your area, as you may be able to spot and report them to a local land manager.