Nintendo’s upcoming mystery gaming system codenamed NX has been the talk of the internet cloud computing circles in the last couple of months. Nintendo themselves did not reveal any information regarding this system, however, speculations around patents which Nintendo filed reveal quite a lot about the system.

This figure in particular was quite the flare: 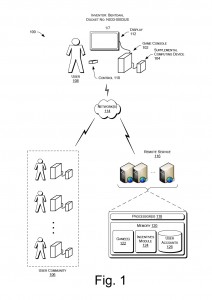 Most readers, gamers or not, might be confused or unaware of the significance of this patent. This why I am here to explain to the best of my abilities why this matters to the gaming world in particular, and to the computing and data world in general.

The traditional way of running games or computer programs has been to purchase a hardware suited for the task in question. If you would like to run games, then you purchase a Nintendo Wii or a PS3 console which are capable of running the games you want to play. If you would like to write documents, listen to music, or use Facebook, then you can purchase a laptop or a desktop that sits comfortably on your lap or desk. This is all fine and dandy and everyone is happy.

In a couple of years time since your acquisition of the hardware, your PS3 or laptop, your software needs and task have changed with the times. The games you want to run require higher computing power to mishmash and flash those realistic pixels into your eyes. The videos you watch on Youtube are HD now and require higher resolution. Your two year old PS3 or laptop won’t cut anymore. These pieces of hardware become obsolete with the rate of technological advancement. Now you set sail to acquire your PS4 and Asus ROG laptop so you can enjoy all those delicious awesome pixels. All fine and dandy and everyone is happy again.

But what happens to your old laptop and your PS3? You throw them away? You store them in the attic? You put in display in a garage sale? These machines are still capable of doing a tremendous amount of calculations and impressive tasks. Perhaps not the tasks that you are currently obsessed with. Perhaps they are not capable of providing you those extra couple of pixels that you were told you need. But, they are still useful. You can use your old PS3 as a file storage for example or your old laptop as a typewritter.

Imagine if there was a way in such that you do not need to replace your current hardware to a different set of hardware. Imagine if instead of replacing your PS3, you just needed to connect a 2nd controller to it and turn it into a machine that is as capable as a PS4. So instead of wasting the computing potential of your PS3 and old laptop you are just adding to it to make it more capable. This is not the same as upgrading your system, as upgrading is still a kind of hardware replacement.

Now imagine if every person who owns a PS3, and a 2nd controller, can connect all of computing potential of all the individual consoles that were ever sold into a pool of resources that is shared between all the owners. If adding a 2nd controller can make such a difference to the computing power, at least in this scenario, then what would happened if we added a 2nd PS3? What about 10 PS3’s? Hell, what about every PS3 that is currently connected to the internet??

If that was possible, why would you ever upgrade your system’s hardware? As time passes, let’s say two years, more people would have purchased consoles, and the more people are using these consoles the more computing power available to everyone. This is basically, in a sense, how cloud computing works, but applied to gaming devices.

In the past such techniques has been used for scientific computing. Instead of investing billions of dollars to build a super computer, why not ask people to donate some of their CPU computing power to the pool? If enough people do so, using an already existing hardware, then there will be no need to create and spend billions of dollars to create a super machine. The computing power already exist out there, but shattered into small chunks of personal computers, laptops, Nintendo Wii’s, xBox’s, etc. We just need to harness it.

Folding@home was one of the popular of such cloud computing experiments.

What Nintendo is trying to do with this patent is that their players and customers would not need to upgrade to a next generation console after the NX. The more NX consoles that exist, the more computing power every NX will be capable of. By doing so, eventually the shared computing power will be great enough to run any game, any process, with no lag, frame loss, less resolution, etc.

And imagine this, if Nintendo make this a reality, why would Nintendo themselves upgrade their development systems? They can just hook their developers into the NX cloud to develop games using the consoles shared pool of computing potential. This means that Nintendo will basically have no operating costs as far as hardware goes, they will be using their customers hardware over the cloud to run whatever they want to run. This is a Skynet kind of situation if you think about it.

Can you imagine if someone hack this NX cloud and used all that power to cyberattack someone? The victim will have no chance of survival. Imagine if someone is using the Supercomputer Stampede to hack into your Facebook account? What chances would you have to keep anything secure, really?

WHO to Classify Video Game Addiction as a Mental Health Disorder

What is Blockchain technology and Why Should You Care?