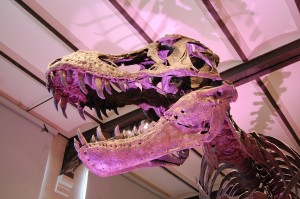 The Tyrannosaurus Rex is known for having tiny arms, but there has been much debate over why the carnivore evolved in this manner. Now, a newly discovered dinosaur is opening up the possibilities.

The creature, known as Gualicho shinyae, was featured in PLoS One on July 13. Archaeologists link it to the Argentina region and claim that it has unique features that distinguish it from other theropods, like the T. Rex. Notably, it was only six feet tall, yet had the same small arms as its larger cousins. It also had two fingers on each “hand,” similar to the T. Rex.

“Gualicho shinyae increases the known theropod diversity of the Huincul Formation and also represents the first likely neovenatorid from this unit,” concluded the authors of the report. “It is the most basal tetatanuran to exhibit common patterns of digit III reduction that evolved independently in a number of other tetanuran lineages.”

But Why Are Its Arms So Tiny?
There are several theories out there as to why creatures, like the T. Rex, have tiny arms. It seems counter-intuitive for these aggressive, carnivorous beasts to be hindered by such a genetic flaw. However, the small arms may have served a valuable purpose.

The most common theory is that the short arms were necessary for the T. Rex to counterbalance its powerful skull. Because the dinosaur used to gather its food with its mouth, this theory may hold true – arms would be unnecessary to the equation.

“It’s telling us that there’s some adaptive advantage to the small arms,” Pete Makovicky, one of the report’s authors, told Business Insider. “Insights into the ‘how’ it happened will get us closer to ‘why.'”

Ramsey, Lydia. “Scientists just got a better idea of how the T Rex got small arms.” Business Insider. Published July 14, 2016.

Archaeologists Discover a New Dinosaur, But Is It a Megaraptor?