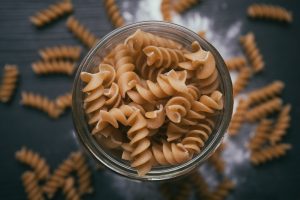 If you’re a lover of pasta, you’ve probably heard a thing or two about how packing on the carbs inevitably leads to weight gain, but is it all bad news? A new study published in Nutrition and Diabetes says that this may not be the case.

The research was led by Italian researchers from the IRCCS Neuromed Institute, and it was funded by organizations and businesses, including Barilla (called it biased, if you want). Researchers examined more than 22,000 people from different regions of Italy. They compared their diets and body compositions.

“We have seen that consumption of pasta, contrary to what many think, is not associated with an increase in body weight,” said George Pounis, lead author of the study. “On the contrary: our data shows that eating pasta results in a healthier body mass index, lower waist circumference and waist-hip ratio better.”

However, it’s worth noting that the individuals maintained a Mediterranean diet. This means that they consumed less meat regularly and ate more plant-based foods. Additionally, they tended to exercise regularly, which could explain their body shapes.

In terms of the study, participants also ate no more than three ounces of pasta at a time. This is less than one-fifth the size of a 16-ounce box of Barilla rigatoni – not very much, according to American standards.

The researchers highlighted the fact that pasta is simply associated with a lower body mass index. This does not necessarily mean that regularly consuming pasta makes the body appear thinner.

But let’s not be quick to rule out the supposed benefits, specifically those associated with a Mediterranean diet.

“We are encouraged by the findings of the study and continue to be interested in exploring and learning more about the health benefits of pasta and a Mediterranean diet,” a Barilla representative told Mashable.

A Mediterranean diet, consisting of primarily fruits, vegetables, fish, and whole grains, has been shown to positively impact health. Eating these foods can reduce the risk of heart disease, cancer, Parkinson’s and Alzheimer’s diseases. It is thought to reduce the level of low-density lipoprotein (“bad” cholesterol) in the body. Regular exercise is also a large part of the Mediterranean diet.

Of course, any diet should be reviewed with your primary care physician before you begin changing what you consume. In any case, the benefits of this one are hard to ignore.

New Weight Study Shows that No, Not All Pasta is Bad For You

The Benefits of Fat