Whether or not you believe in a god, evidence shows that our ancestors did in the past. Furthermore, it may have fueled their fears and assisted with the expansion of society.

A new study published inÂ NatureÂ shows that religiosity might have contributed to greater cooperation and collaboration, despite geographic separation between groups of people.

“Our results support the hypothesis that beliefs in moralistic, punitive and knowing gods increase impartial behavior towards distant co-religionists, and therefore can contribute to the expansion of prosociality,” the researchers wrote in their report. 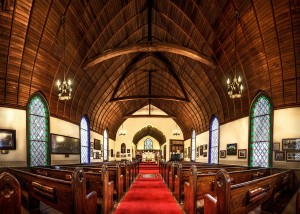 To draw their conclusions, the authors of the report used extensive ethnographic interviews and two behavioral games designed to measure impartial rule-following among people. Eight communities from around the world were examined, and all participants adhered to some form of religion. The higher people rated their gods as punitive and knowledgeable about human thoughts, the more they moved toward co-religionist strangers.

âPeople may trust in, cooperate with and interact fairly within wider social circles, partly because they believe that knowing gods will punish them if they do not,â wrote the authors, according to ABC Science Online.Â âMoreover, the social radius within which people are willing to engage in behaviors that benefit others at a cost to themselves may enlarge as godsâ powers to monitor and punish increase.â

The researchers concluded that gods seem to harness the suite of psychological predispositions we have and steer sociality and pro-sociality. Additionally, it seemed like the threat of punishment could push humans to do dishonest things and overcome the evolutionary drive to “look after our own.” For this reason, evidence showedÂ that religious individuals tend to stay away the pressure that could stem from their values.

âWe found exactly what you would expect from a rational being where the more children people had the more likely they were to favor themselves and their local community at the expense of these geographically distant communities who shared the same religion beliefs and practices,â said Lead Author Benjamin Purzycki.

While we may not attributeÂ many of our daily decisions to our religious (or non-religious) beliefs,Â our ancestors were certainly more influenced than we originally thought.

Researchers: The Battle Between Science and Religion Comes From Our Brains