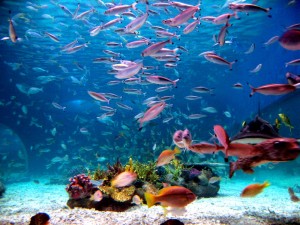 What if you were told that your house would be completely under water within the next 50 years? Could you imagine all of your belongings under the sea?

The hypothetical scenario is starting to scare people along the Northeast coast of the U.S., who saw their sea levels rise almost four inches between 2009 and 2010. This data comes from a study conducted by researchers at the University of Arizona and the National Oceanic and Atmospheric Administration.

And if you live in Maine, the news is a little worse: Portland saw a five-inch sea level rise over this timespan.

“This magnitude of the interannual sea-level rise (SLR) is unprecedented (a 1-in-850 year event) during the entire history of the tide gauge records,” wrote the authors of the report. “Here we show that this extreme SLR event is a combined effect of two factors: an observed 30 percent downturn of the Atlantic meridonal overturning circulation during 2009-10, and a significant negative North Atlantic Oscillation index.”

In short, the researchers found the data — specifically on the Atlantic overturning circulation — to be extremely unusual. They ended the study by staying that extreme SLR events may be linked to “human-induced climate change,” and note that increased greenhouse gas concentrations are likely to play a role in more changes over time.

The 2009-10 SLR event was almost as significant in the process of beach erosion as hurricane events.

So How Does This Effect Me?

Well, if you live anywhere on the Northeast coast, your house might not be filling up with water just yet. However, the downturn in the Atlantic meridonal overturning circulation has the potential to influence storminess. This means more frequent storm surges, and the beach is evidently taking a big hit from all of this oceanic change. The researchers of this particular study also warn that we may not see the end of extreme SLR events any time soon.

“For the 21st century, modeling results suggest that the increase in the greenhouse gas concentrations is likely to cause more extreme SLR events on the interannual time scale along this densely populated coast,” the authors write. “Once coastal storms compound high sea levels, more damages will result.”

But if you’re looking for more solid facts to convince you, here is some food for thought. The Union of Concerned Scientists reports that sea levels have risen eight inches since 1880. By 2100, sea levels will be between 12 and 48 inches what they are today.

The East Coast isn’t the only area being hit hard, either. The Gulf of Mexico has experienced more than eight inches of sea level rise over the past 50 years alone. Land is also subsiding in these areas, making room for more water.

Now isn’t the time to panic, but it is worth considering the impact of your own carbon footprint.

Carbon Dioxide is Set to Skyrocket: Buckle Up for Turbulence