Just when you thought all of the mind-blowing predatory dinosaurs have been unearthed, a new one pops up.

Scientists announced on Jan. 20 that they have discovered the fossils of a Dracoraptor, according to Reuters. This dinosaur lived more than 200 million years ago, and it stems from the early Jurassic Period. During this era, the world was recovering from a mass extinction. The Dracoraptor’s impeccable timing gave it an opportunity to pave the way for future predators. 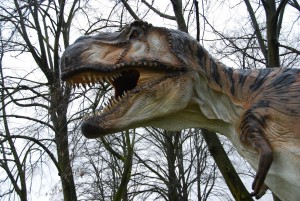 Previously, Earth’s largest land predators were not dinosaurs, but rauisuchians. In short, they tended to be four-legged reptiles that lurked in rivers, waiting to consume their prey. When the extinction took its toll on these creatures, the Dractoraptor emerged, becoming the fierce predator of the day.

“This dinosaur starts to fill in some gaps in our knowledge about the dinosaurs that survived the Triassic extinction and gave rise to all the dinosaurs that we know from Jurassic Park, books and TV,” Paleontologist Steven Vidovic told Reuters.

Dracoraptor means “dragon thief.” The dinosaur was thought to have small but serrated teeth, under half an inch long. It likely ate small mammals and lizards.

“Theropod dinosaurs are extremely rare in the Lower Jurassic and most reports are of only fragmentary remains,” wrote the authors of the study, which was published inÂ PLoS One. “This rarity results in a considerable gap in our knowledge of these animals at a time when, indications are, theropods were diversifying rapidly.”

Approximately 40 percent of the bones of the Dracoraptor were discovered, making it one of the most complete fossils discovered to date.

“The skull is around two-thirds complete, but disarticulated,” the researchers stated. “Most of the few associated teeth have fallen from their alveoli, but are closely associated with tooth-bearing elements. The anterior rostral bones, premaxillae and maxillae are associated, but not articulated. Some elements of the skull are preserved as external molds, or have composite bone/moldic preservation, notably jugal and lacrimal elements.”

The discovery of the fossil near a shoreline could indicate that it was a marine dinosaur. However, the researchers prefer to refer to it as a “shoreline dwelling animal” more than anything else.

Finally, it’s worth Â mentioning that it is an early representative of the theropod group, which contained the likes of the T. Rex. It also had the same general shape as the dinosaur, showing its true predatory roots.

TheÂ realÂ question is whether the two of them might’ve gotten along.

A Crocodile-like Creature Once Terrorized the Biggest, Baddest Dinosaurs

Dinosaur Chompers May Have Inhibited Their Ability to Chow Down