Today’s wars seem never-ending,Â and perhaps there’s a reason for it. New evidence indicatesÂ that mankind’sÂ sparring has been going on for longer than we originally thought.

A study published inÂ NatureÂ describes a mass grave found in Kenya, dating back to approximately 10,000 years ago. Researchers believe that the grave may have been dug following one of the oldestÂ wars on our planet. 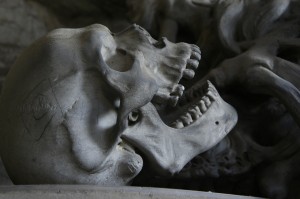 The war represents the first inter-group violence between hunter-gatherers from Nataruk. Ten of the 12 skeletons found on-site show signs of violent death.

“The remains from Nataruk are unique, preserved by the particular conditions of the lagoon with no evidence of burial,” the authors wrote in their report. “They offer a rare glimpse into the life and death of past foraging people and evidence that warfare was part of the repertoire of inter-group relationships among prehistoric hunter-gatherers.”

But what does this mean in terms of our biologyÂ as humans?

“I’ve no doubt it is in our biology to be aggressive and lethal, just as it is to be deeply caring and loving,” Study Author Robert Foley said in a statement. “A lot of what we understand about human evolutionary biology suggests these are two sides of the same coin.”

And previous research publishedÂ in 2015 may add even more to this theory.

Last year, new evidence emerged of what may possibly be the first murder in history. A fossilized skull was discovered in a Spanish cave, dating back more than 430,000 years. It had fractures commonly associated with blunt trauma from tools, such as axes and spears. Experts found the skull particularly interesting because it showed that our species, homo sapien,Â is not unique to murder. ManÂ has been committing gruesome acts well before evolving into the species we know today.

SoÂ how does this all tie intoÂ the war and killingÂ we see today?

For one thing, it’s still happening. The major difference is the technology we have inÂ our hands to cause destruction. Second, it’s not uncommon — as the study authors concluded after looking back on historical data, conflict can sprout up within the most settledÂ communities.

Of course, this isn’t exactly aÂ goodÂ thing. It simply means that weÂ may need treat itÂ as inevitable, and solutions for peace must constantly evolve alongside it.

“Evidence of a prehistoric massacre extends the history of warfare.” University of Cambridge. January 20, 2016.

A 430,000-year-old Skull May Belong to the World’s Oldest Murder Victim