We aren’t the only ones being impacted by climate change.

In fact, new research suggests that our planet and its inhabitants have been feeling the brunt of climate change for quite some time. A statement from experts at the University of Oxford now says that one of the world’s largest sea creatures went extinct 90 million years ago due to changes in its environment.

For years, scientists believed that many animal extinctions could be blamed on an asteroid that struck Earth about 65 million years ago. However, the icthyosaur has eluded experts because it disappeared well before the asteroid would’ve hit the planet. 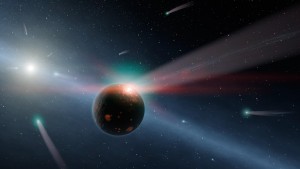 The icthyosaur looks something like a dolphin with a large snout and sharp teeth. It existed approximately 150 million years ago, leaving scientists to wonder why it went extinct so soon. Now, a new theory is linked to climate change — experts believe that the evolution of the environment in the late Cretaceous period could’ve caused the downfall of the reptile. However, they also speculate that the beast went through two mass extinction periods.

One of these periods wiped out a number of animals during the Cretaceous period, while another finished them all off later. Climate variations were spotted during the first extinction upon the examination of fossils. Fluctuations in temperature, which changed the amount of oxygen and carbon dioxide in water, may be to blame for the loss of the icthyosaur’s habitat.

“Although the rising temperatures and sea levels evidenced in rock records throughout the world may not directly have affected ichthyosaurs, related factors such as changes in food availability, migratory routes, competitors and birthing places are all potential drivers, probably occurring in conjunction to drive ichthyosaurs to extinction,” said Valentin Fischer, one of the researchers from the University of Oxford.

Changes in Our Existing Environment
When climate change is mentioned, many of us think of the melting ice caps and rising sea levels. However, one step beyondÂ this thought is the impact of these environmental changes on the planet’s inhabitants. Humans are feeling the impact of global warming, but what other creatures can relate?

For more insight into the realities of climate change, as seen from the perspective of animals, visit the World Wildlife Fund website.