European storks are known for migrating during the year, but new research shows that Portugal and Spain’s storks are starting to stick around — for the sake of trash.

A study published in BioMed Central showed that the birds are learning to feed off of the waste in landfills. In turn, they’re opting out of migration and staying in Portugal and Spain year-round.

“The continuous availability of food resources on landfill has facilitated year-round nest use in white storks and is influencing their home ranges and movement behavior,” wrote the authors of the study. “White storks rely on landfill sites for foraging especially during the non-breeding season when other food resources are scarcer and this artificial food supplementation probably facilitated the establishment of resident populations.” 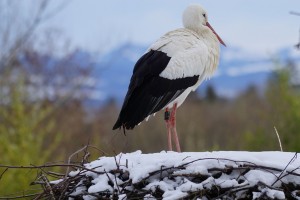 However, it’s worth noting that the birds are also thriving in their natural environment. Not only are they sticking around Portugal and Spain, but they’re generally increasing in population. This could attribute to the growing numbers of them spotted in the region, meaning it isn’t just a lack of migration contributing to the situation.

“The number of overwintering white storks in Portugal has increased dramatically in recent decades (from 1,187 individuals in 1995 to 10,020 in 2008 and to approximately 14,000 birds in 2014),” wrote the authors. “Simultaneously, the number of migrant individuals crossing the Straits of Gibraltar has increased by 86.4 percent between 1985 and 2004, and recent data indicates this trend continues suggesting that the overall population is increasing, not simply changing in migratory behavior.”

This wouldn’t be the first time that birds have been seen to stop migrating for the sake of an abundant food source. Since the 1980s, white stork populations have boomed in Iberia as a result of artificial food in landfills. Milder European winters have allowed birds to feast on landfills more frequently without interruption from Mother Nature.

While it may seem like a good thing for animals, the fact of the matter is that artificial food sources can result in many problems for wildlife. Young animals, in particular, may not learn how to survive without artificial food over time. As seen with the storks, reproduction rates may also be affected with artificial food is readily available.

Finally, animals may eventually invade human areas when they become accustomed to artificial food sources. This can result in the spreading of disease in human-populated locations. As they say, “Don’t feed the animals.”