In a study published inÂ Evolution,Â researchers from the University of Chile detailedÂ aÂ recent experiment involving theÂ mutation ofÂ a chicken legÂ to give it the shape of a dinosaur leg. The scientists inhibited the early maturation of a leg of a chicken embryo to yield the results.

Alexander Vargas, one of the researchers, stated that the experiment is an example of reverse evolution. The goal is to better understand the genetic changes involved in evolution. However, it’s hard to ignore the link commonly made between dinosaurs and their modern-day relations: birds. 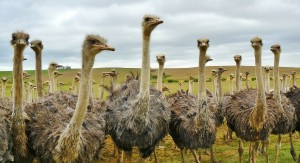 Birds are thought to have evolved from theropods in the Jurassic period. Theropods are a group of dinosaurs that began as carnivores, but eventually evolved to eat plants and insects. They existed approximately 145 million years ago.

In their experiment, the scientists manipulated the Indian Hedgehog Homolog gene, which is common in all animals. They delayed the development of the fibula bone in the bird, which caused it to take on a dinosaur-like fibula bone shape. The researchers claim that this confirms the hypothesis that a bone can be regrown with characteristics from the past by disrupting early maturation.

The Link Between Birds and Dinosaurs

Many people have made links between dinosaurs and birds, but it’s worth noting that they are commonly associated with theropods — a particularÂ typeÂ of dinosaur, but not the only type. To say that birds are direct relatives of all dinosaurs may be a bit of a stretch.

Interestingly, birds have been associated with dinosaurs as far back as the 19th century. Scientists including Thomas Henry Huxley made the connection, specifically to theropods. Today, many researchers claim that you can see evidence of the link between birds and dinosaurs by simply examining their skeletal structures. Birds have hollow, thin-walled bones, as well as stiffened tails. They also have S-shaped curved necks, large orbits (eye openings in the skull), and hinge-like ankle joints.

Of course, this isn’t to say that these are the only theories circulating around birds and dinosaurs. In fact, many researchers of the 20th and 21st century have set out toÂ disproveÂ these theories as of late. Some scientists claim that it’s too difficult to link birds’ structure to theropod structures when there is little definitive evidence of the dinosaurs’ bodiesÂ left today.

Say what you will, but the possibility that we could be living alongside “modern” dinosaurs is still pretty intriguing.