The 2016 presidential election season is already off to a hot start, but what if the candidates were told that the old debate between science and religion is allÂ in our heads? New research from scientists at Case Western Reserve University and Babson College believe this may be the case. If so, itÂ would inevitably play in a role in the way peopleÂ — not just politicians –Â perceive faith and science. 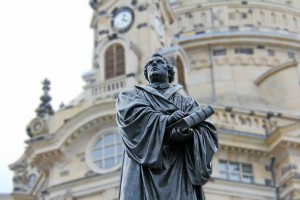 “When there’s a question of faith, from the analytic point of view, it may seem absurd,” said Tony Jack, lead researcher. “But, from what we understand about the brain, the leap of faith to belief in the supernatural amounts to pushing aside the critical/analytical way of thinking to help us achieve greater social and emotional insight.”

In order to believe in a god or universal spirit, the researchers found that people appear to suppress the part of the brain that is used for analytical thinking. Instead, they engage the empathetic network of the brain.

“A stream of research in cognitive psychology has shown and claims that people who have faith are not as smart as others,” said Richard Boyatzis, a member of the research team. “They actually might claim they are less intelligent.Â Our studies confirmed that statistical relationship, but at the same time showed that people with faith are more prosocial and empathic.”

Through eight experiments, the scientists determined that the more empathetic the person, the more likely he or she was religious. This also plays on previous research, which shows that women tend to have more spiritual beliefs than men. In general, women have a stronger tendency to show empathy than men.

Jack concluded the team’s findings with one simple statement.

“Religion has no place telling us about the physical structure of the world; that’s the business of science,” he said. “Science should inform our ethical reasoning, but it cannot determine what is ethical or tell us how we should construct meaning and purpose in our lives.”

The team intends to conduct future studies to determine if an increase in empathy can lead to more spiritual belief. Until then, we’ll have to hope the presidential candidates don’t learn how to tweak these findings for an advantage before November.

“The conflict between science and religion lies in our brains.” Case Western Reserve University. Published March 23, 2016.

Researchers: Our ‘Vengeful Gods’ May Have Helped Society Expand Over Time