If you’ve ever felt a sense of rage — perhaps while on the road — you know how it can be to struggle with the wave of anger. Now, scientists say that you may be able to blame it all on a parasite in your brain.

A study involving 358 adults looked at how relatively harmless parasitic infections can potentially cause bouts of rage in humans. The researchers from the University of Chicago discovered that these types of infections, which can be found in 30 percent of people, are directly associated with increased aggression.

Specifically, the infection can be linked to Intermittent Explosive Disorder, or IED. It is characterized by impulsive, problematic outbursts of verbal or physical aggression. IED affects approximately 16 million Americans, which is more than bipolar disorder and schizophrenia combined. 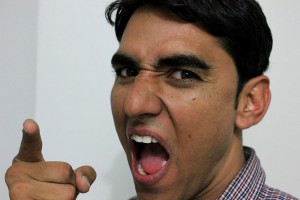 “Our work suggests that latent infection with the toxoplasma gondii parasite may change brain chemistry in a fashion that increases the risk of aggressive behavior,” said Senior Study Author Emil Coccaro, Ellen. C. Manning Professor and Chair of Psychiatry and Behavioral Neuroscience at the University of Chicago. “However, we do not know if this relationship is causal, and not everyone that tests positive for toxoplasmosis will have aggression issues.”

The findings, which were published in the Journal of Clinical Psychiatry, are a part of the team’s initiative to further research in the area of treatment for IED. That being said, the authors note that their study results do not address whether a toxoplasmosis infection can directly generate increased aggression or IED.

Toxoplasmosis is relatively harmless in healthy adults. However, it resides in brain tissue, and some research has shown that it can be linked to psychiatric diseases. Toxoplasmosis can be transferred through the feces of infected cats, undercooked meat, or contaminated water.

But before you panic, there are other parasites you should concern yourself with before worrying about toxoplasmosis. N. fowleri, for example, is dedicated to chomping down on brain matter. Eventually, it can translate into seizures and unconsciousness.

Trypanosoma is another parasite that can result in devastating consequences for its host. It begins its life in the blood and lymph nodes before moving onto the brain. Eventually, it results in a wide variety of psychological complications and sleepiness — a trypanosoma infection is commonly referred to the “sleeping sickness.” In the end, it leads to coma and death.

Of course, you shouldn’t necessarily barricade yourself in your home to avoid these nasty parasites. However, it helps to know what we’re up against in the world as humans.