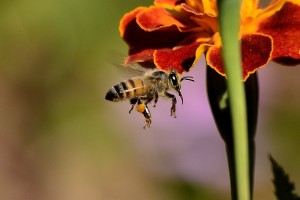 Bees are responsible for pollination, but they aren’t the only ones doing the hard work.

A new study publishedÂ in theÂ Proceedings of the National Academy of Sciences of the United States of AmericaÂ has found that between 25Â and 50 percent of pollination is performed by non-bees. This means that while bees do a lot of the job, they get a little help from insects, such as flies, beetles, moths and butterflies. Birds and bats even play a role in the pollination process.

But don’t entirely rule out those busy little bees. Research also found that the non-bees that help with pollination areÂ notÂ as effective as bees. That being said, they made more frequent visits to specific flowers than bees, so perhaps the playing field is relatively even.

Why Care About Bees?
Bees might just seem like another insect to you, or a nuisance if you happen to irritate them in their natural habitat. However, they are critical to the ecosystem and agriculture, according toÂ Nature.Â As pollinators, honeybees in particular are essential to producing flowers and seeds that contribute to the diets of wild animals.

At least four species of North American bumblebees have experienced large declines in recent years. Two of these species are on the brink of extinction, which could bring serious consequences for the ecosystem.

Helping Out the Bees
Now that you know how important these little creatures are to the environment, you can start putting in some effort to help them out. One easy way to do your part is to create a habitat for them to live in, according to the Xerces Society.

For instance, consider planting heirloom variety flowers in your yard. Rather than double-petaled hybrids, these plants can give bees the pollen and nectar they desire. Using blue, purple or yellow flowers can also attract bees. Generally, bumble bees are color blind to red.

Bird boxes, rock wall cavities and compost piles are common nesting spots for bumble bees. Typically, most bees nest under ground in abandoned holes that were initially made by squirrels or other rodents.

Whether you love the fuzzy little insects or you simply want to lend a helping hand, the bees could always use a little support.

“Non-bee insects are important contributors to global crop pollination.”Â Proceedings of the National Academy of Sciences of the United States of America. October 20, 1015.