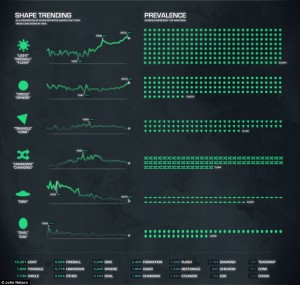 Have you ever wondered why people call UFOs “flying saucers?” It sounds silly, when you think about it, but there’s an actual story behind this commonly used term.

Unfortunately, “flying saucer” is the result of a misquote. Now, it seems as if it will be marked in our vocabulary for the rest of time. Kenneth Arnold, an amateur pilot from Idaho, is the man who used the terminology (or something close to it) initially back in the 1940s. While flying a small plane over Mineral, Wa., on June 24, 1947, he had a close encounter of his own. He saw a flash of light that was flying 15 miles away from him, according to The Atlantic. Eventually, it flashed nine lights in rapid succession before speeding away.

When Arnold was asked to explain his encounter, he claimed that it gave him an “eerie” feeling, and he could not identify what he had seen. He told reporters that the UFOs flew “like a saucer if you skip it across the water.”

And so, there you have it.

Although this is not the end-all, be-all explanation for where “flying saucer” comes from, it is one of the leading candidates thus far. Several reports from the 1940s credit Arnold as using the words, “saucer, “disk,” and “pie pan” to describe his encounter.

UFOs and Their Shapes
Despite the term that Arnold helped create, UFOs aren’t always shaped like flying saucers. A report released by the National UFO Reporting Center shows that UFOs come in all shapes and sizes.

“Fireballs” or “flashes” of light are most common, with more than 23,000 people surveyed citingÂ UFOs in this form. About 12,000 people say they’ve seen “circle” or “sphere” UFOs, while an excess of 8,000 claim to have seen triangular ones.

“Saucer-like” UFOs were near the bottom of the list, with only 5,249 people reporting them. It’s also worth noting that in 1970, about 32 percent of people said they had seen UFOs in this shape. This number dropped to less than five percent in 2014.

The real question that presents itself is not, “Are aliens real?” Instead, we should be asking, “What are we really seeing?” Whether UFOs are beings from outer space or government modes of transportation, how have they evolved over the decades? To me, it’s a bit more interesting than examining the history of the automobile.

Garber, Megan. “The Man Who Introduced the World to Flying Saucers.” The Atlantic. June 15, 2015.

Animal Tracking with Drones May Be in Our Future