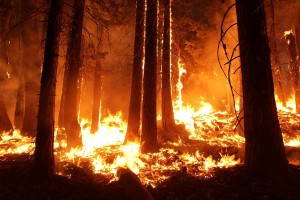 Anyone in California will tell you that they’ve been feeling the effects of drought for quite some time. However, researchers now believe that they aren’t the only ones being impacted — Mother Nature is feeling it, too.

New evidence published in theÂ Proceedings of the National Academy of SciencesÂ journal shows that wildfires have been worst than they’ve been in years across the region. About 10 million acres have been scorched across the Western area of the United States, and California alone could lose 58 million trees by the time the drought is over, according to Newsweek.

The team that looked into the impact of the drought was led by Ecologist Greg Asner. He used a laser-guided imaging tool to sweep over California via plane. The device took pictures of the forests below, gauging how much water content they have. In the photos, trees with a red/orange tinge were deemed “severely depleted” of water. The tan-shaded trees in the images were “under stress” as a result of the drought.

When all of the colorful images of trees were added up, the research team concluded that 58 million large trees were being negatively impacted by the drought. Assuming the drought continues in the area, the trees will die.

“California relies on its forests for water provisioning and carbon storage, as well as timber products, tourism, and recreation, so they are tremendously important ecologically, economically, and culturally,” said Asner. “The drought put the forests in tremendous peril, a situation that may cause long-term changes in ecosystems that could impact animal habitats and biodiversity.”

However, this photographic evidence didn’t bringÂ allÂ gloom and doom. With the information derived from the images, scientists can tell which trees are most prone to fire and death. These predictions could potentially help researchers better understand the drought, as well as areas of danger.

“Our high-resolution mapping approach identifies vulnerable trees and changing landscapes,” Asner stated. “Continued airborne and satellite monitoring will enable actions on the ground to mitigate a cascade of negative impacts from forest losses due to drought, as well as aid in monitoring forest recovery if and when the drought subsides.”

About 41,000 square miles of forest experienced extensive loss as a result of little water availability between 2011 and 2015.