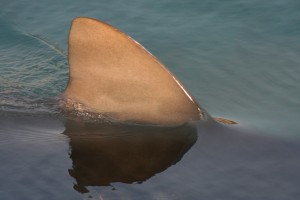 If you live near the shoreline on Long Island, you may want to listen up.

Scientists have found that the Great South Bay has become home to several sand tiger sharks, which are using this area as breeding grounds. Veterinarians and researchers working forÂ the Wildlife Conservation Society’s New York Aquarium are the ones to make the discovery, which may come as a disheartening surprise to locals. However, it’s worth noting that these fearsome-looking creatures are not aggressive.

Additionally, scientists have been collecting an abundance of information on sharks through the animals swimming in local waters over the past four years. This means that even though you may notÂ thinkÂ sharks are everywhere around Long Island, there are at least probably more in the area than you thought.

“The discovery of a shark nursery is fantastic news for local conservationists seeking to learn more about sharks and other species in the New York Bight,” said Jon Dohlin, vice president and directorÂ of WCS’s New York Aquarium. “Through field projects and outreach efforts by the New York Aquarium and other organizations, we hope to raise awareness about our local marine environment and the need to manage our natural wonders.”

Nursery Grounds and East Coast Sharks
Up until now, only a handful of sand tiger shark nurseries have been identified nearby, one of which is off the coast of Massachusetts. With the new nursery in Great South Bay, scientists will have an opportunity to tag the sharks and collect information over an extended period of time.

The type of data that will be collected will pertain to the sharks’ migratory behavior and habitat needs. This information could help the species as a whole in the future, which has been deemed a “Species of Concern” by the U.S. National Marine Fisheries Service.

Sand tiger shark pups are typically not born in the area, according to Merry Camhi, director of the NY Seascape program. However, they tend to migrate to the New York waters as juveniles during the summer months.

Portuguese Man o’ Wars are Washing Ashore in New Jersey, But What Are They?