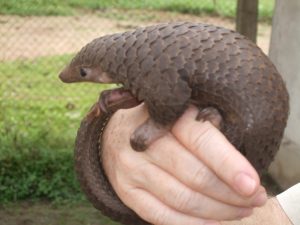 At the end of December 2016, Chinese officials honed in on an illegal trafficking operation involving pangolin scales. In total, about 3.4 tons of pangolin scales were seized at a port in Shanghai.

According to Chinese media, it was the largest seizure of its type in the history of the country – but what are pangolin scales? Furthermore, why are they so valuable?

The pangolin is a mammal, and it’s the only one with scales. It looks like a cross between an armadillo and a platypus, depending on who you ask. There are eight species of it – half live in Asia, while the other half reside in Africa.

The creatures have extremely sharp claws that they use to burrow and dig for ants (for food). They can produce a skunk-like smell from their rear ends when they sense fear. However, they do not have much else in terms of defense.

When the pangolin is threatened, it curls into a ball. Its scales give it a razor sharp defense. However, this does not stop humans from picking them up when they are in a convenient, spherical shape.

The International Union for Conservation of Nature considers the pangolin to be the most widely traded wild mammal on the planet. It also estimates that more than a million have been killed by poachers over the past 10 years. Populations have been depleted by as much as 80 percent.

The scales of the pangolin are used for a wide variety of reasons. Their meat is considered a delicacy in some parts of the world, and their scales are used in traditional Chinese medicine.

According to black market prices, the scales that were seized in the most recent Chinese heist would have been worth more than $2 million. To produce the amount of scales found by Chinese officials, up to 7,500 pangolins would have had to be killed.

Experts say that the scales themselves primarily consist of keratin. This is the same substance that makes up fingernails. However, those who believe in Chinese medicine are under the assumption that the scales can help with health conditions including cancer.

The scales that were seized by Chinese officials in December were mixed with wood chips and shipped from Nigeria, according to local media.

Feltman, Rachel. “WTF is a pangolin? Fall in love with this sentient artichoke before it goes extinct.” Popular Science. Published Dec. 28, 2016.

About 3.4 Tons of Pangolin Scales Were Seized in Shanghai, But What Are They?