Many people naturally assume that a large catastrophic event, like an asteroid collision, caused the demise of the dinosaurs. However, a new study published in Current Biology by a group of Canadian researchers indicates that their diets and a changing environment might have also contributed to their downfall. 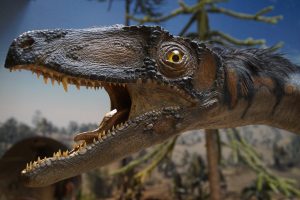 Specifically, the research points to the teeth of fossils. The scientists looked for patterns and variations in the teeth of some dinosaurs, only to find that biodiversity began to wain 18 million years before the asteroid hit Earth. Variations in the teeth of dinosaurs would’ve indicated a stable, diverse ecosystem. However, the scientists claimed that variations began to slow as time progressed, and the diets of dinosaurs changed as well. This would indicate that the ecosystem was already shifting prior to the asteroid in a way that negatively impacted the health of dinosaurs.

Creatures of the era appeared to be turning to nuts and seeds as a form of nourishment. This theory also supports the idea that bird-like creatures were allowed to thrive and continue to evolve, thanks to this change in biodiversity. In fact, the ancestors of birds likely had beaks, rather than teeth.

“In the conditions in the wake of that major catastrophe, the asteroid, the ecosystem would quickly lose foliage and animal life,” David Evans, co-author of the study, told the Toronto Star. “But those seeds would be these high-energy packets of food that would persist on the landscape, and any animal that could access them would have an ecological advantage.”

Philip Currie, lead author of the study, told the news source that birds were likely able to survive the mass extinction, primarily due to their evolution and ability to forage for seeds.

“It’s hard to know for sure, it’s hard to test these things with fossils, but I think it’s very plausible,” Stephen Brusatte, a University of Edinburgh paleontologist, told the news source.

The authors also note in their study that the exposure of seeds due to widespread burning of ground cover would specifically benefit granivores, like birds.

“This pattern is observed in modern fire succession communities, where granivorous birds are the first avians to re-occupy disturbed habitats due to food resource accessibility,” the authors wrote.