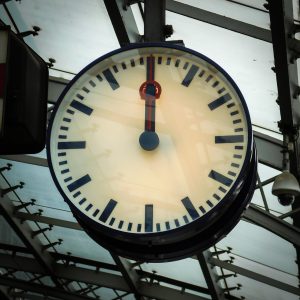 For the first time, the Doomsday Clock moved 30 seconds closer to midnight, placing it two-and-a-half minutes to midnight, according to the Bulletin of the Atomic Scientists.

The move was made by the group on Jan. 26, and it was determined by the Bulletin’s Science and Security Board. A team of experts, which including 15 Nobel laureates, also consulted with the board before the clock was set. It was last reset on Jan. 22, 2015, and moved to three minutes-to-midnight at the time.

But what does all of this mean? What are the implications of the Doomsday Clock, and why does it matter?

What is the Doomsday Clock?

In order to understand why the most recent time change is important, it’s critical to grasp the concept of the Doomsday Clock.

It was originally created in 1947. The Bulletin debuted the clock on the cover of its magazine for the first time during this year as a way to symbolize the urgency of nuclear dangers facing the scientific community. Ideally, the Doomsday Clock is also meant to convey the importance of the threats to political and public leaders.

Back when it was first created, the Doomsday Clock was set to seven minutes-to-midnight. It reached three minutes-to-midnight in 1949 when U.S. President Harry Truman told the American public that the Soviet Union had tested their first nuclear device, beginning the arms race. At the time, the Bulletin said that Americans had “reason to be deeply alarmed.”

The Doomsday Clock was moved three minutes-to-midnight in 2015 because of “unchecked climate change, global nuclear weapons modernizations, and outsized nuclear weapons arsenals,” according to the Bulletin.

“The clock ticks now at just three minutes to midnight because international leaders are failing to perform their most important duty—ensuring and preserving the health and vitality of human civilization,” the group said at the time.

When the clock was set to two-and-a-half minutes-to-midnight this past January, the Bulletin published a statement to explain its rationale.

“In addition to the existential threats posed by nuclear weapons and climate change, new global realities emerged, as trusted sources of information came under attack, fake news was on the rise, and words were used in cavalier and often reckless ways,” wrote Editor John Mecklin.

We may not be doomed, but in the least, some of the world’s wisest people are attempting to warn us of potential danger. Perhaps we should stop to recognize their efforts – it’s the 70-year anniversary of the Doomsday Clock, after all.

Mecklin, John. “It is two and a half minutes to midnight.” Bulletin of Atomic Scientists. Published Jan. 26, 2017.

Here is Exactly How to Survive a Nuclear Bomb Drop