Before you head to the drive-thru for a quick snack, take a moment to consider what might be wrapped around the food. These days, it isn’t just the fast food itself that may pose a threat to your health. A new study suggests that the chemicals used in the products that hold fast food can cause a wide range of issues.

According to researchers, one-third of fast food packaging that was tested in experiments had fluorinated chemicals. The chemicals are used for their grease-repellent properties. 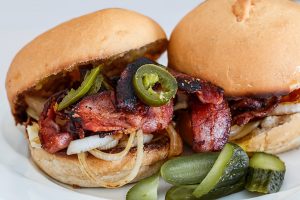 The study, which was published in Environmental Science and Technology Letters, is based on experimentation with approximately 400 samples of “food contact papers, paperboard containers, and beverage containers” from fast food joints throughout the U.S. The researchers discovered that 46 percent of food contact paper and 20 percent of paperboard had detectable fluorine.

“The prevalence of fluorinated chemicals in fast food packaging demonstrates their potentially significant contribution to dietary polyfluoroalkyl substance (PFAS) exposure and environmental contamination during production and disposal,” the authors wrote in their report.

But what is the big deal if these chemicals are in the packaging of fast food?

The Dangers of Fluorinated Chemicals

As Laurel Schaider tells CNN, these chemicals are known for making their way into the food they touch.

“These studies have found that the extent of migration depends on the temperature of the food, the type of food and how long the food is in contact with the paper,” the Silent Spring Institute researcher told CNN. “And it depends on which specific chemical [is in the packaging].”

As for the actual dangers associated with PFASs, they range from elevated cholesterol to decreased fertility. They have also been linked to kidney and testicular cancer, as well as decreased immune response in children.

According to this recent study, wrappers for Tex-Mex food, desserts, and breads were the most likely to have fluorine. The chemicals could be found in cups, as well as containers and wrappers.

Although the U.S. has been working to phase out some PFASs, other countries still use them in products that make their way over to local fast food establishments. In turn, Americans are still exposed to them, but the researchers found them in a wide range of concentrations. They believe that recycled materials – which could have PFASs in them – could be contributing to the issue as well.

But perhaps this won’t be an issue for future generations. McDonalds, one of the country’s most popular fast food chains, reported that U.S. sales dropped 1.3 percent in the final quarter of 2016. Could the days of fast food glory be numbered?

Just How Much Pee is in That Pool Where You’re Swimming?