El Nino has been blamed for extreme weather in the past, and it may soon be linked to intense wildfires in the Amazon.

The 2016 seasonal fire forecast from scientists at NASA and the University of California, Irvine, indicates that El Nino conditions could lead to drier weather in the Amazon. In fact, it’s en route to becoming one of the driest seasons since 2002. In turn, the risk of wildfires is exceeding what was originally predicted in 2005 and 2010. 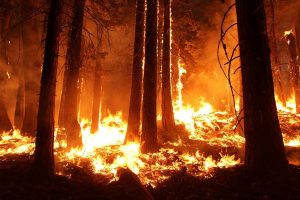 During these specific drought years, wildfires raged through much of the Amazon. Although it may seem like an Amazon fire could not have an impact elsewhere, there are several local, regional and long-distance implications as a result of these flare-ups. For instance, the air quality drops as a result of the smoke, negatively impacting individuals with breathing issues. Then, of course, there’s general forest degradation.

“When trees have less moisture to draw upon at the beginning of the dry season, they become more vulnerable to fire, and evaporate less water into the atmosphere,” UC-Irvine scientist Jim Randerson told Phys.org. “This puts millions of trees under stress and lowers humidity across the region, allowing fires to grow bigger than they normally would.”

What is El Nino?
El Nino actually dates back to the 1600s when a fisherman in South America noticed unusually warm water while in the Pacific Ocean in the month of December. Today, NOAA defines El Nino as “the large-scale ocean-atmosphere climate interaction linked to a periodic warming in sea surface temperatures across the central and east-central Equatorial Pacific.”

North Americans usually feel its effects during the winter season when temperatures are warmer than usual in the Northern and Western regions. Some areas, such as the Gulf Coast, may also experience wetter than usual weather.

El Nino is commonly linked to natural disasters stemming from extreme drought or rainfall. However, NOAA notes that it’s often socioeconomic factors that drive issues linked to weather, rather than the weather itself. In fact, El Nino’s consistent impact on climate has made weather easier for scientists to forecast.

It’s also worth knowing that El Nino (and La Nina) only impact 25 percent of the world’s land surface during any season. While its impact may appear to be large, especially in an area like the Amazon, humans tend to magnify the power of Mother Nature when they feel vulnerable.