Florida has been in the national spotlight as of late for something unexpected – its algae bloom. New photos from NASA’s Earth Observatory show that a green, toxic algae bloom along Florida’s Treasure Coast can be seen from space. Some of the bloom extends into Lake Okeechobee, Florida’s largest freshwater body of water.

State Gov. Rick Scott has declared a state of emergency since the bloom began affecting local waterways. As it turns out, this didn’t have to be the case – it was the Army Corps of Engineers’ decision to push excess water from Lake Okeechobee outward into other areas. The move was made after large amounts of rainfall threatened nearby towns and cities.

Gov. Scott claims he will push lawmakers to spend the millions of dollars necessary to control the bloom, which smells like “a hundred dead animals.”

But what exactly is the algae bloom all about? 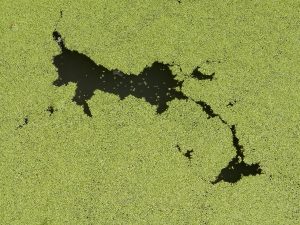 The Florida Algae Bloom of 2016
The algae bloom officially began in the spring. It had originally covered 33 miles of Lake Okeechobee before expanding outward. Now, experts say it is impacting the quality of water in the Atlantic Ocean.

The algae is a thick, green substance that is described as slimy by onlookers. Individuals who come into contact with it may experience skin irritation, nausea, vomiting, and liver problems, in severe instances.

Past Algae Blooms
Gov. Scott is worried, and for good reason. Toxic algae blooms can contaminate waterways and key water supplies for local communities. The World Health Organization reported that in 1988, a total of 42 people died after drinking water from a cyanobacteria-tainted reservoir. Similarly, 140 people developed symptoms of liver disease in Australia where blooms were reported in a nearby water source.

Fish populations may also be negatively impacted by these types of algae blooms. They suck the oxygen out of water, giving little left to other creatures in the environment.

Thus far, the Florida algae bloom has been difficult to control due to its size and changing tides. Gov. Scott is appealing to President Obama to declare a state of emergency.