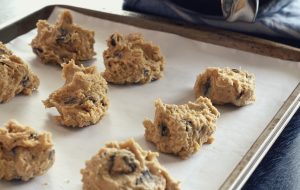 If you love spooning chunks of cookie dough into your mouth before actually doing any baking, you might want to think twice. The U.S. Food and Drug Administration is here to let you know that there are several ingredients in raw dough that could pose a threat to your health – specifically, flour.

The FDA went as far as to post an announcement on June 28, warning consumers of contaminated flour that may have made its way into recent supplies shipped across the country. General Mills, which is responsible for the contamination, has recalled 10 million pounds of flour due to E. coli concerns. The risks pertain to all unbleached, all-purpose and self-rising flours under the brand names of Gold Medal, Signature Kitchen’s, and Gold Medal Wondra.

Flour has a particularly long shelf life, but General Mills isn’t recommending that people keep potentially contaminated products around. Instead, the company and the FDA are encouraging consumers to throw out the products, regardless of expiration date.

“Flour is derived from a grain that comes directly from the field and typically is not treated to kill bacteria,” said Leslie Smoot, Ph.D., a senior advisor in FDA’s Office of Food Safety and a specialist in the microbiological safety of processed foods. So if an animal heeds the call of nature in the field, bacteria from the animal waste could contaminate the grain, which is then harvested and milled into flour.”

That being said, there are ways that the harmful bacteria can be killed. Most of them are through cooking – taking steps such as baking, boiling, roasting, microwaving, and frying. This simply highlights the fact that the raw stuff – despite its tastiness – is dangerous to your health. When it hasn’t been cooked, the bacteria is given an opportunity to thrive and enter the body when consumed.

Food Safety, Salmonella and E. coli
The most commonly known bacteria associated with raw cookie dough is salmonella, due to the uncooked egg that goes into the batter. While it’s true that this bacteria may pose a threat, the latest notification from the FDA proves that it isn’t the only one in existence.

Individuals who contract illness from E. coli may begin to exhibit symptoms including bloody diarrhea and abdominal cramps. However, more serious instances may lead to hemolytic uremic syndrome, a form of kidney failure.

To avoid these health issues, raw cookie dough should never be consumed. Additionally, raw ingredients should always be cooked according to recipe, which can effectively kill off bacteria.

Everything You Need to Know About the Zika Virus