Every spring, when farmers plow their fields, they find large boulders that weren’t there the previous year. Does the boulder fairy deliver these to the farmer? Nope! The truth is, the rocks have always been there, hiding deep in the soil out of reach of the plow blade. Thanks to the process of frost heaving, every spring sees the surface emergence of new rocks, stones, and boulders.

Believe it or not, rural people living a century or two ago really did think that the large boulders that seemed to appear overnight in the farm fields were placed there by boulder fairies, evil sprites, or mischievous leprechauns. That was just one way they found to explain the almost-magical emergence of new rocks. Some of our ancestors believed that larger rocks were grown from smaller ones. Indeed, they believed that small pebbles were the offspring of larger mother-stones and they would eventually grow into large rocks themselves. While it is easy for us now to laugh at the naivety of our predecessors, we need to give them props for attempting to explain the unexplained in a way that was familiar to them.

Today, we know that rocks cannot procreate or grow and that magical creatures don’t exist. Instead, geologists have discovered that the surface emergence of rocks and boulders is caused by a phenomenon known as frost heaving.

Although it may be easy to say that frost heave is simply the result of the expansion of frozen water, however, the force of frost heave is greater than that of frozen water. When water freezes, it expands to increase its volume by 9%. Ground soil with a 50% water content would expand by only 4.5%. This creates a frost heave of only about a half an inch per vertical foot of soil. Assuming that the soil is squeezed in just one direction, upward, this accounts for a very slow emergence of boulders. But any farmer can tell you that the rocks emerge at a quicker pace. Other factors are involved that increase the upward thrust.

In the 1930s, Stephen Taber, a geologist with the University of South Carolina, conducted a series of experiments that showed that frost heave is not solely caused by the expansion of freezing water. Taber’s research showed that the formation of ice lenses in the soil is the driving force of frost heave. Ice lenses are large, thin sheets of ice that form in frozen soil, either at or just behind, the freezing front. They can range in thickness from paper thin to several feet in thickness. Ice lenses grow with the parallel to the surface of the soil. When the soil freezes and thaws, multiple ice lenses can form, stacked on top of each other with a thin layer of frozen soil between them. The ice itself is composed of many filament-like ice crystals that form and grow parallel to the direction of heat flow. It is this growth of the ice crystals in the ice lens, Taber proved, that determine the direction of the heave.

The ice lens, because it sits at the edge of the freeze line, is fed by warmer water in the soil below it. Here we see water behaving in ways that seems, at first, to be unnatural and illogical. Defying gravity, the water moves upward. It also exists in a liquid state alongside ice. The upward movement of the water is a capillary action, the movement of water through a porous material like soil due to other forces. In this case, that force is cryogenic suction. Cryogenic suction force occurs at the edges of a freezing front, such as the base of a growing ice lens. At a molecular level, the liquid water is pulled, or sucked, toward the frozen ones. In an ice lens, the liquid water is pulled up from below the lens and is the driving force behind frost heave.

Two factors are responsible for the why liquid water can exist at sub-freezing temperatures. Water can remain in a liquid state as a premelted film on the surface between the ice and individual grains of soil. Premelting is a fairly common natural phenomenon and is responsible for a number of things including the formation of dea ice and the electrification of thunderclouds. In premelting, the liquid water creates a barrier or film to reduce resistance between the surfaces of the ice and the surfaces of the grains of soil.

The second way that water can remain in a liquid state is known as the Gibbs Thomson Effect. In the Gibbs Thomson Effect, water in a porous material, like soil, freezes along a curved arc that forms convexly. A melting point depression occurs, in which the temperature needed to freeze liquid water into solid ice is no longer 0-degrees Celsius, but becomes much lower. As the freezing process continues, the pore space becomes increasingly smaller, creating a higher convexity of the ice. Eventually, the ice and soil reach a point in which the energy needed to ease the curvature of the solid ice exceeds the energy required to maintain the water in a liquid state and the water freezes. Both of these factors contributing to the existence of liquid water are important because it is the movement of water within the soil that creates the upward thrust of frost heave. 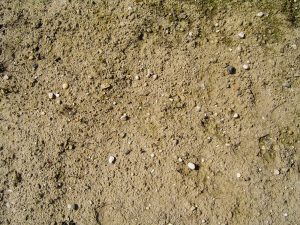 Also in the 1930s, concurrent with Taber’s research on frost heave, a Swedish geologist named Gunnar Beskow, working for the Swedish Institute of Roads, became his research into frost heave, focusing on the composition of soil. He observed that the size of the soil particles impacted the degree of frost heave. Beskow, along with Taber’s independent research, learned that frost heave is more evident in soil that more easily lends itself to capillary action. This type of soil tends to be finely-textured with a balance of loams, silt and sand that is permeable. Glacial soil deposits most often have the right combination and texture of soil to be conducive to capillary action, and thus, frost heave.

The surface emergence of rocks and boulders in farm fields is the end result of this complex and logic-defying behavior of water within porous, glacial soil. As the water is pulled upward by the formation of ice lenses, it brings with it solid material, like rocks, that are forced to the surface by the cycle of freezing and thawing. It is not quite as dramatic as rock-planting sprites and leprechauns, but the power of freezing water, while grounded in science, is almost as magical.

To blanch or not to blanch?