Was the world’s largest dinosaur finally unearthed last year? One paper that was just published in the Proceedings of the Royal Society B. claims that this may be the case. (Phillips, 2017)

According to a new report, the Patagotitan might be the largest dinosaur to have ever walked the earth. The name, which was just given to the dinosaur, roughly translates to “giant from Patagonia.” The American Museum of Natural History put a fossil of the dinosaur on display back in January 2016. Originally, the remains were found by a research team from the Museo Paleontologico Egidio Feruglio that was digging in the Patagonian region of Argentina. At first, the archaeologists called it a titanosaur. 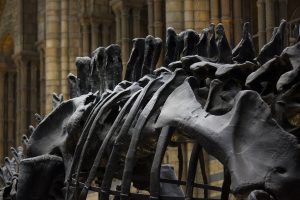 “Titanosauria was the most diverse and successful lineage of sauropod dinosaurs,” the authors wrote in their report. “This clade had its major radiation during the middle Early Cretaceous and survived up to the end of that period. Among sauropods, this lineage has the most disparate values of body mass, including the smallest and largest sauropods known.” (Carballido et al., 2017)

But despite the discovery of their fossil, the researchers note that there is still not a lot known about this particular dinosaur – aside from the fact that it may be the largest of its kind.

“Here we describe a new giant titanosaur, which represents the largest species described so far and one of the most complete titanosaurs,” the researchers explain. “Its inclusion in an extended phylogenetic analysis and the optimization of body mass reveals the presence of an endemic clade of giant titanosaurs inhabited Patagonia between the Albian and the Santonian.”

However, not everyone is satisfied with the archaeologists’ claims. Mathew Wedel, a paleontologist at the Western University of Health Sciences, told Smithsonian Magazine that the Patagotitan may have been comparable in size to the Argentinosaurus. He based his conclusions on the latest measurements of the dinosaur reported in the media. (Switek, 2018)

“I think it would be more accurate to say that Argentinosaurus, Puertasaurus and Patagotitan are so similar in size that it is impossible for now to say which one was the largest,” Wedel told the magazine.

Macalester College paleontologist Kristi Curry Rogers told Smithsonian Magazine that there may even be a larger dinosaur fossil out there waiting to be discovered.

“Even if we’ve discovered the largest terrestrial animals ever known, we haven’t found the biggest representatives of their species so far,” she says.

And so, we wait for the next big thing.