Crop circles, aliens, and…fidget spinners? Yes, they can all make it into one story.

Earlier this month, an unusual design was spotted in a patch of crops in West Sussex in the United Kingdom. Near Climping Beach, locals noticed that something – perhaps an otherworldly being – left a strange marking in the ground. Local Matthew Williams was the first to spot the crop circle, which was about 200 feet wide. However, no one was around to see who (or what) created the strange shape.

Williams, who is a crop circle expert, noted that its shape looked something like a toy – specifically, a fidget spinner. These devices, which are designed to combat boredom (and anxiety, depending on who you ask), have an X-like shape. 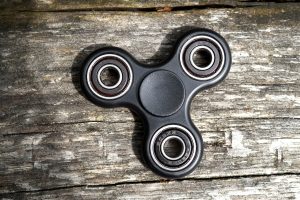 “This is a great formation,” Williams told The Daily Record. “It certainly could be the world’s largest fidget spinner, although I have no idea who created it. The circles are so precisely engineered, it’s hard to fathom that they might not have been created by machines. I don’t know who left it there, but whoever did definitely had some time on their hands.” (McStay, 2017)

As of late, police have warned local farmers of drone users, who may be creating crop circles with their devices for fun. Farmers are being encouraged to report unusual crop circle appearances as they become known.

There are several supernatural explanations for crop circles. The most popular is aliens – extraterrestrial beings who apparently find it necessary and/or entertaining to craft these strange patterns on crops on Earth.

One of the first legends of crop circles began back in 1678 when a pattern was supposedly spotted in oak stalks. A farmer had reportedly said he “would rather pay the Devil himself” to cut his oat field than cut it himself, and voilà! A strange circle appeared the next day after the Devil allegedly took a scythe to the field. (Radford, 2017)

As for the natural explanations? They range from crop disease to human hoaxers – just people who like pulling the wool over farmers’ eyes. Some people believe that the wind also has the power to create these strange patterns that pop up in crop fields. Whichever explanation you believe, there seems to be one for everyone – your imagination is the only limit when it comes to this unusual phenomenon.