Famine is a real problem in certain areas of the world, and while we are not necessarily facing a food shortage as a planet just yet, many people are thinking ahead to the future. What will happen when our resources start to dwindle? How will our growing population sustain itself over time? As it turns out, carbon dioxide may be the answer (Ward, Futurism, n.d.).

Joint research conducted by scientists from Lappeenranta University of Technology (LUT) and VTT Technical Research Centre of Finland have been able to develop a protein with carbon dioxide and electricity that can be used as animal feed. The idea behind doing so is that food could be produced as needed for animals, freeing up land for other purposes, such as plant growth (“Protein produced with electricity to alleviate world hunger,” n.d.). 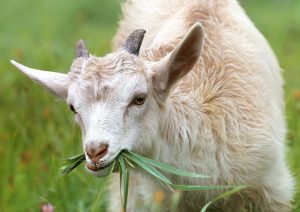 “Compared to traditional agriculture, the production method currently under development does not require a location with the conditions for agriculture, such as the right temperature, humidity or a certain soil type,” explained Jero Ahola of LUT. “This allows us to use a completely automatized process to produce the animal feed required in a shipping container facility built on the farm. The method requires no pest-control substances. Only the required amount of fertilizer-like nutrients is used in the closed process. This allows us to avoid any environmental impacts, such as runoffs into water systems or the formation of powerful greenhouse gases.”

The researchers also believe that their process is 10 times more energy-efficient as the photosynthesis process used to cultivate products, such as soy.

“We are currently focusing on developing the technology: reactor concepts, technology, improving efficiency and controlling the process,” Ahola continued. “Control of the process involves adjustment and modelling of renewable energy so as to enable the microbes to grow as well as possible. The idea is to develop the concept into a mass product, with a price that drops as the technology becomes more common. The schedule for commercialization depends on the economy.”

Between 2014 and 2016, the United Nations Food and Agriculture Organization estimates that one-in-nine people in the world are suffering from chronic undernourishment. There are approximately 11 million undernourished people in developed countries around the globe (“World Hunger, Poverty Facts, Statistics 2016 – World Hunger News,” n.d.). By freeing up some of the land that is used to keep livestock fed, more of it may be used to cultivate food, which may be critical to these types of food issues.