Most of us know that dogs evolved from wolves thousands of years ago, but how did they become as domesticated as they are today? Furthermore, is there any science behind their friendliness toward humans?

As it turns out, there is data on this very topic. Recently, a group of researchers came together to look at the “hypersociability” domestic dogs and why they’re especially polite to human beings (vonHoldt et al., 2017). 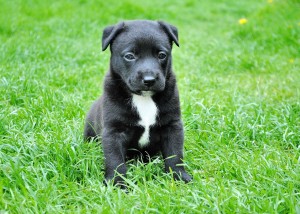 “Although considerable progress has been made in understanding the genetic basis of morphologic traits (for example, body size and coat color) in dogs and wolves, the genetic basis of their behavioral divergence is poorly understood,” the researchers note in their study.

The scientists hypothesized that the answer may be in the genes of the animals. Some breeds may be more bold or playful than others, but in general, dogs seem to love people across the board.

To test their theory, the scientists looked at a chromosomal region in dogs that impacts sociability, a trait that is thought to be critical to the domestication process. They analyzed the human-directed sociability of 18 domestic dogs and 10 human-socialized gray wolves using standard sociability and problem-solving tasks. The sociability test was specifically designed to measure human-directed proximity-seeking behavior. It was assessed by comparing total sociability scores across all sociability conditions.

In the end, the researchers discovered that there was a definitive link between certain genetic changes and behaviors associated with certain social cues. With the discovery of this link, the researchers believe they are closer to learning how sociability evolved and created key differences between wolves and dogs (“Why dogs are friendly – it’s written in their genes – BBC News,” n.d.).

Dogs have many unusual behaviors that are easy to misinterpret. Let’s take a look at some of the most commonly confused actions by our pups (“10 Strange Dog Behaviors Explained,” n.d.).

Of course, if you suspect that any of your pet’s activities are unusual or harmful, contact your vet as soon as possible. He or she can clear up why your pup may be exhibiting strange behavior and ease your concerns.