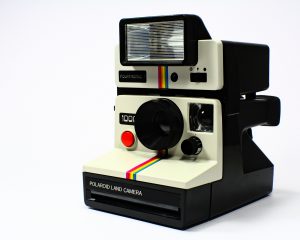 Vintage. Old school. Retro. Whatever you call it, there’s a noticeable uptick in nostalgic items these days. When you combine this trend with today’s obsession with instant gratification and we get a climate that is ideal for the comeback of the Polaroid instant camera. Although the current models of Polaroids are cuter than the bulky black box of the 1940s and 1950s – and come in a variety of colors including pink, white, and aqua – the technology that gives us instant photos has remained remarkably unchanged since the Polaroid instant camera first hit the market in 1948.

History credits Edwin Herbert Land with inventing the Polaroid instant camera, but the root of the idea actually began with Land’s daughters, Jennifer and Valerie – clearly visionary teens who were way ahead of their time. In 1944, the girls complained to their dad that it took too long to see their vacation pictures. The point-and-shoot cameras of their time used film that then had to be developed and prints made for the negatives. It was a lengthy process. But the sisters wanted to be able to see there pics right away.

Land was no stranger to the developing world of photography. It has been rumored that, as a young boy, Land slept with a copy of Physical Optic by R. W. Wood under his pillow. And although he dropped out of Harvard before earning his degree – choosing instead to continue his education on his own through studied readings – he was eventually appointed professor of experimental physics at Johns Hopkins University in 1901.

By by 1944, Land set his sights on giving his daughters the instant photos they wanted. It took three years of trial and error experimentation for Land to perfect his combination camera and darkroom.

Despite its ease of use, the Polaroid camera uses complex technology that has, as its starting point, the basics of point-and-shoot film. In this kind of film, the color negative has three layers of silver bromide and each layer is dedicated to a different color, either blue, red or green. Light from exposure to an image changes the positively charged silver ion (Ag+) to Ag in each layer, creating a reverse of the image, or a negative, from which a color print is made. Land’s instant film works much the same way. The film is also comprised of the same three layers of light sensitive silver bromide, but with the addition of other layers of oppositely-colored hydroquinone dye. Below the blue silver bromide, for example, there is a layer of yellow dye, because blue and yellow are opposites on the color where. Then beneath the green layer is magenta dye and beneath the red layer is cyan dye. The image on the film appears through reverse filtration. In this process, the dyes from the unexposed layers filter to the surface, combining with the image layer along the way. Once the red layer is exposed, for instance, no cyan dye can filter through, but the yellow and magenta can. Yellow and magenta combine to make red.

In the Polaroid camera, the film, after it is exposed to the image, passes through a series of rollers that smears chemicals on it as it exits the camera. The first of these developing chemicals is potassium hydroxide which seeps into the layers on the film and reacts with the hydroquinone dye layers. The dye molecules that form as a result can then rise to the surface of the film through the light-sensitive layers in the places where the corresponding silver bromide molecules have not been exposed.

Once the potassium hydroxide hits the timing layer, the residual base chemicals are neutralized. Potassium thiosulfate and other chemicals in the developing solution then dissolve away any unexposed silver bromide. It sounds like a lengthy and complex process but it only takes about 60 seconds from start to finish. What is left is an instant photographic print – a tangible reminder of a moment that has just passed.

Despite its nearly 70 year history, Polaroid ceased production of instant film in 2008. As digital photography became accessible to the masses, consumers found the instant film to be too expensive and too limiting. Once a digital camera (or cell phone) is purchased, the consumer can take nearly endless amounts of pics for little to no extra cost. However the allure of tangible prints remain. So in 2010, a group of businesspeople, together with chemists and engineers, started selling instant film produced at a factory in the Netherlands. Their goal is to not only replicate the iconic Polaroid film, but to develop a way to make the product more affordable. Their task is not as easy as picking up where the former instant film factory left off. The chemists experimented to several years to get the perfect balance of silver bromide and dyes needed for each layer, the proper thickness of the layers, and the correct amount of developing chemicals to create accurate colors. All these elements must work in a delicate unison to complete the whole process. And we have to appreciate the innovative work of Edwin Land who figured all this out seven decades ago.

Carbon Dating May Soon Become Obsolete, Thanks to Pollution