Today I left work, did not go home, drove to two sold-out movie theaters and finally drove past my house to stand in a line the length of a theater corridor to watch a three-hour movie, after which I (finally) returned home 16 1/2 hours after I departed for work and sat down at my computer. Why? So I could bring you the nitty gritty scientific details of the movie Interstellar.

I want to be very clear about something right now: This post contains spoilers. I could not find a way to write this without giving away pieces of the story line. While I’m not reviewing the plot here, I am covering the science, which gets doled out in little bits throughout the movie. In a moment I’m going to give you a choice about things; but for right now you can keep reading without fear of ruining the film: I have hidden the spoiler section under the MORE tag, so you’ll have to click on it to expand the post. Plus I’ll give you a “Here be Dragons” warning right before hand, just in case the scripting on the MORE tag fails.

You have two options for seeing this movie: You can see it the way I saw it, or you can see it the other way. If you want to see it the way I saw it (this is my recommended version), read my post about time. Interstellar deals with space travel and they reference time dilation. Learning about how time works before going to the movie will help you make sense of some of the more technical stuff. Once you’ve read the piece, grab yourself a bucket of popcorn and a cola (but not a giant one, because it’s a three hour movie and the human bladder gets mighty uncomfortable when it’s held at maximum capacity for too long) and enjoy the show. Come back after closing credits and we’ll review everything you’ve seen.

The other way is to read my piece about time, click on the MORE tag below and go into the movie knowing too much ahead of time. I’ll say again: I recommend the first method because I think it lends to an overall more enjoyable movie experience.

You have my advice, but it’s your call.

Did you read Problems with Time? If not, do it now. Since it covers time dilation and explains the basic problems with quantum gravity (which is the issue Murph faces with Professor Brand’s theory about gravity and time), I’m not going to rehash that material here. Instead, I’ll cover the major pieces of science and physics that play key roles in the film’s storyline with the understanding you already checked out the time bit. 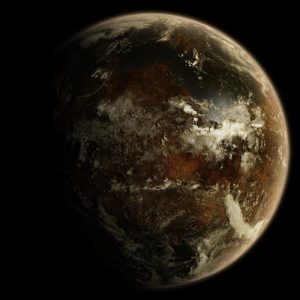 To start things off, we see that planet Earth is dying. The cause of this isn’t directly named, but it is alluded to a variety of different ways: Failing crops, a reference to a sharp population decline and roving dust storms. Are these credible symptoms?

One of the characters mentions the atmosphere containing 80% nitrogen. That’s actually not a bad thing. In fact, that’s the current concentration of nitrogen in our atmosphere and it’s really important to life on Earth. The context of the statement, however, seems like it’s meant to suggest something terrible. Let’s follow that line of thought: Our current methods of pollution are increasing the nitrogen levels in the environment. When nitrogen increases, it changes soil composition, aquatic life and water quality. In more subjective terms, it changes which plants are able to grow in the soil; it kills fish; and it poisons drinking water. Fewer plants growing means there’s less ground cover, which leads to soil erosion, resulting in frequent dust storms. So yes, this scenario checks out.

Cooper and his team spent two years traveling to Saturn. Since they didn’t want to sit around their spaceship twiddling their thumbs and fretting over the pending doom of their planet, they took a nap along the way.

Emergency preservation and resuscitation (EPR) is the method of replacing blood with another fluid to effectively freeze the body for short periods of time. When the body temperature lowers, cellular activity and the need for oxygen also decrease. While there are ongoing human trials of this technology, the effects are very short-term and it’s only being tested in ambulances, on patients that have a very high (90% or more) likelihood of dying before they reach the hospital.

Cooper’s suspended animation isn’t intravenous and the water they’re submerged in looks warm and steamy (which rules out cryonics), so it isn’t any method of life preservation we currently have. That’s not to say it’s unrealistic as EPR technology looks very promising.

Wormholes are theoretical tears in the fabric of space-time that mend themselves together with other torn segments, allowing a short bridge to form between two distant locations. Below you’ll see a schematic that’s similar to Romilly’s explanation with the folded paper. The thing to remember is that the hole-punching technique only works if the two ends are close to each other (e. g. if the universe is U-shaped). If they’re far away (like in the movie), the bridge you’re building defies the physics of relativity and must be composed of new material that is out of sync with the rest of the universe. According to theoretical physicist Kip Thorne (who was on of Interstellar’s executive producers), this is “exotic matter,” which has negative mass.

Assuming we have a wormhole, and we’re able to travel through it, there’s one more factor that needs to be considered: Time travel. If you’re using exotic matter to bridge different areas of space-time, it’s conceivable that the time you’re traveling to is different from (either ahead or behind of) your own. Here’s the classic thought experiment to explain this: You have a wormhole. You travel through it and arrive in another place nine days before the date you entered the wormhole. Now let’s say the place you traveled to is a two day journey from where you started. If you go through the wormhole (nine days into the past) and travel back to the entrance, you will arrive seven days before you left.

As I said, wormholes are theoretical. We have an idea of how they might work, but haven’t been able to prove they exist. We do know that relative physics wouldn’t really apply inside the confines of the exotic matter bridge, so it’s good that all the weird perspective stuff happened while Cooper and his team were traveling through it.

NASA sends a series of manned spacecraft through the wormhole to search for viable planets through a trial-and error method. While ancient explorers might stock up on provisions and set out on the briny toss to search for undiscovered countries, people tend to be a bit more cautious when it involves leaving the solar system. NASA is using the Kepler space observatory to identify potentially habitable planets outside our solar system. Since their resources are limited, they’re making Kepler’s findings available to non-NASA folks to help them hunt for suitable planets.

Two of the planets in the movie orbit a black hole. I will address this first, then move on to the nature of black holes. 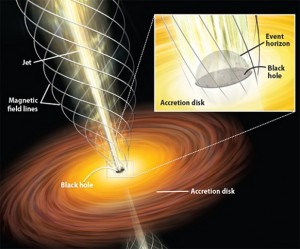 Planets can orbit black holes. However, they risk being very cold and lifeless places because of the black hole pulling the heat from them. This can be avoided if the black hole has an accretion disk (pictured to the right), which occurs when gas or matter is pulled around a black hole, thus shrouding it in a ring of gas and matter. (Black holes often form in binary systems, where they’re able to siphon burning gas from their neighboring star).

Black holes form when stars many solar masses larger than our sun die and collapse in on themselves.

Stars burn because they are fusing helium and hydrogen in their core. Larger stars burn faster than do smaller stars. At some point they begin fusing heavier and heavier elements, eventually creating iron. Once the iron core exceeds 1.4 solar masses (the Chandrasekhar Limit), the star has insufficient outward force to maintain its equilibrium and its gravity causes it to collapse in on itself. If the mass of the star is sufficient, it will become a black hole.

Technically, we do not know what happens inside a black hole. That’s because its gravitational pull overpowers everything, including light. The event horizon is the “edge” beyond which there is no return. Given what we know of how black holes operate, we theorize that anything that passes beyond the event horizon is stretched by the gravity (the technical term for this is “Spaghettification.” I kid you not) and crushed under the pressure of an infinitely dense core.

Since we can’t technically state what happens inside a black hole, the movie’s creators decided to take some creative licensing. When Cooper’s inside the black hole, we see a representation of the weird physics that wormholes belong to, as time and space coalesce in an endless tunnel of moments that Cooper can drift through at will. From the moment he crosses the event horizon to his rediscovery back in our solar system, the film is portraying science fantasy. Even so, it’s not totally unbelievable because one theory about black holes is that they’re pockets of unreality and that the universe sequesters them inside event horizons to keep the fabric of space-time from falling apart. 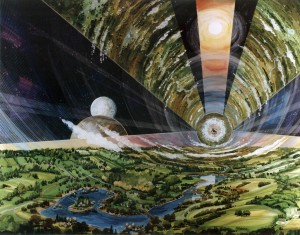 The very last thing I’ll cover is the space station Cooper wakes up on at the end of the movie. This is similar in design to an O’Neil Cylinder, which was proposed by Gerard O’Neil in 1974. There were a host of other habitats proposed (the earliest was the Bernal Sphere, proposed in 1929), but nothing ever came of them. The concept was to install an artificial environment, complete with soil and atmosphere, on the walls of a spherical or cylindrical space station, which would then spin to simulate gravity through centrifugal force. While we haven’t built any, Arthur C. Clarke used the concept in his 1973 novel Rendezvous with Rama and my inner sci-fi geek was all kinds of thrilled to see one in the movie.

Cost constraints made NASA scrap any plans they had to build these. You’re talking about moving 500 miles of dirt, plants and building materials into space to put them in an artificial terrarium. The habitat itself would probably have to be built in space; the required fuel to launch something that big off of Earth would be substantial. Space needs to be a little more accessible for these to work. Naturally there is an organization monitoring space access and planing to build its own space habitats when doing so become feasible.

NASA has always been interested in providing healthy food for its astronauts. They have dedicated a lot of research to hydroponic farming (water-based plant development without soil). They even designed a rotary hydroponic system, which they never built. But take a look at that system and tell me if it reminds you of anything. Suddenly the stars seem so much closer, don’t they?

I hope this look into the concepts behind Interstellar has helped you appreciate the movie or astral physics a little bit better. I know I covered a lot of material here and by necessity I condense a lot of information. If there are any of these concepts you’d like me to expound on, please leave a comment requesting a more detailed explanation and I’ll be happy to write a future blog post dedicated to that subject.

Until then, look to the stars and do not go gentle into that good night.