Meet Frederick Chu, a man with a healthy fascination for the things that make us unhealthy. Ask him about bacterium, virii, or prions, and you’re likely going to get a very animated version of a biology text book mixed with some horror stories of just how ugly it can get.

Granted, Fred also has a knack for talking you ear off about kung fu, history, swords, and anything from ancient Egypt, Japan, or China. That’s because Fred is not only a medical student, but he’s also a historian and martial arts enthusiast. In fact, Fred’s second love is studying the empires, religions, philosophy, and military history of these regions because of this personal interest in the martial arts of those regions.

But now, after travelling the world to Egypt and China, Fred returned to his first love of microbiology and the body. He’s currently studying at the University of Illinois College of Medicine where he is fascinated with understanding the ins and outs of how the body breaks down so he can help people heal through a combination of medicine, high spirits, and maybe even a touch of martial arts.

I’ve had the pleasure of getting to know Fred over many lunches, laughter, and a trip or two to the other side of the pond. In granting this interview, Fred gave me a whole new perspective on microbiology, and what drives one to it.

What drew you to your field?

In Fred’s own words, he admits that “History didn’t pan out so well, and after having an epiphany over the notion of service and skills, I chose medicine instead. I realized that the human system was so amazingly complex and fascinating that I just had to study it and learn what happens when things go wrong.” However, everyone knows it’s never a one man show. Fred attributes some of his aha moments to his mentors, of which he’s had many in both the realms of martial arts and the university.

Fred illustrates his deference (and luck) to his martial arts mentors with the following:

Over the past decade, I’ve seen martial arts as a wonderful way to further my education in direct and indirect ways. Indirectly, the good health, mental clarity, confidence, and ability to relax in stressful situations has often been the underlying factors in my good grades on college exams as well as in job and medical school interviews. I could work harder, work more efficiently, and I knew the point of diminishing returns and hence, when to back off and refresh myself — often by practicing a short bit of martial arts!

My martial arts seniors, for the most part, were living examples of the skills I wanted, both on and off the mat. Directly, martial arts have helped me get some interviews and build rapport with a variety of supervisors at several jobs. When working at a county library infamous for rambunctious patrons, it was the martial arts techniques I learnt that enabled me to subdue and evict certain undesirable patrons who had overstayed their welcome, and it was my agility and knowledge of throwing techniques that enabled me to save several children from falling and cracking their heads on the stone floor. Such acts earned me glowing reviews and letters of recommendation for other jobs.

Furthermore, as an interesting coincidence (some might say divine providence), the interviewers for both gateways to my professional vocation (the immunology laboratory in which I worked as a laboratory technician and the head of the admissions committee for the college of medicine) were expert martial artists themselves: one has his black belt in Hapkido (Korean martial arts) and the other in Karate. Both interviewers understood the discipline inherent in successful martial arts students and almost hired me on the spot. The fact that we could chat so amiably about a shared hobby worked very well in my favor.

Fred also has glowing things to say about his academic mentors, as you can see here:

My university mentors were all geniuses and trailblazers in their own fields. Of my four microbiology professors, each one had their name attached to some incredible bit of research. One had essentially given birth to the study of Salmonella genetics, which is a boon to public health, especially with the relatively recent “jump” of Salmonella to infecting leafy green vegetables (a current favorite item in many diets). My summer research mentor essentially wrote the first paper describing Salmonella‘s secretion machinery which enables it to infect humans. My virology professor is widely considered the world’s expert in denguevirus and contributes much research to eliminating dengue hemorraghic fever. My laboratory professor is a well-known quality control microbiologist and essentially safeguards the water supply of several states. All of these men (the microbiology faculty at Purdue seems to be all men) are brilliant men with amazing memories and diagnostic skills. Their incredible skills at logic and deduction in light of extremely little information is a skill that I want to develop. I also wouldn’t mind having the ability to memorize several phonebook-sized textbooks worth of medical and microbiological information. They were true academic role models for me.

What is your favourite thing about working in this field?

Fred’s desires are fuelled by far more noble thoughts than “acquiring a career with a lot of money”. This follows through to his favourite thing about the field, which is all about acquiring practical and theoretical knowledge that serves to help people in their darkest times. This often calls for a lot of studying, but Fred has fun with it. His favourite book for studying his field has been Dr. Frank Netter’s collection of images — with Wong Kiew Kit’s ‘The Art of Shaolin Kung Fu.Â  being a close second.

Netter’s images are an absolute godsend for students seeking to learn anatomy. The images are masterfully rendered in color and look similar enough to actual cadavers that it is almost no problem that most cadaver laboratories will not allow photographs or video recordings to be taken within. Netter’s work is so brilliantly detailed that it serves as a firm foundation for so many fields: gross anatomy, physiology, pathology, and even the histology (microscopic anatomy). 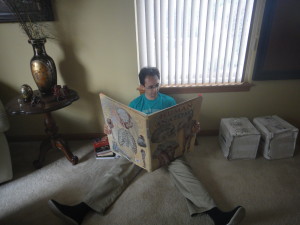 On the other hand, Fred balances the hard science with the fun of the Zen imperative, “simple, direct, and effective” found in ‘The Art of Shaolin Kung Fu.  Fred also likes that this book touches on all important aspects of martial arts: form, skills training, application, and philosophy (including strategies and tactics), which has influenced Fred to spend a lot of time (and money) practising much of the philosophy in this book — and sees the value of applying it to every day life, medical school, and healing efforts.

What inspires you? (What do you find most exciting?)

Granted, this search for what can help others also feeds what makes Fred excited about studying the human body. He professes that watching the breakdown of the various parts of the body, and then understanding how it can come back together again is the part of the human system that keeps him in awe and wonderment as he works through the next 7 years of medical school.

In fact, if you follow Fred on any social media, you’ll see that he often has advice to doll out about how to heal oneself with smart, science and martial arts based techniques. To him, they go hand in hand.

What challenges you in your field?

For those of you that are thinking about the world of microbiology, medical student, or anything related to the field, you should probably know the sheer breadth of information that must be mastered before acquiring a basic level of competency is the greatest challenge in the field, as Fred said. It’s a tough field with lots of knowledge to learn during the first 4 years of your academic training — which is just undergraduate work. Then, you’re looking at a further 4 years in medical school till you earn your M.D., but you’re not finished. After that, you have a residency time in which you really perfect your hands on skills and get to learn your field intimately. This last phase can last anywhere between 3 and 10 years, depending on your speciality.

What can the public or citizen scientists do to help you meet the challenges?

Fred takes a relatively straightforward approach to noting the best things that you can do as a citizen scientists and average citizen to meet the challenges of the medical field are to:

What advice would you give to people considering your area?

Know what you are getting into; job-shadow, do some internships and volunteer work, and get experience with the world outside of academia. Be honest with yourself as to why you want to enter this field. If it’s for the money and prestige, go away. If it’s to get a fine understanding and appreciation for the human being and to help people meet that most basic milestone of health so that they can go on to achieve their potential, there may be a place for you here.

I have gotten to where I am because I stood on the shoulders of giants. Be thankful to your teachers and mentors and always be aware that you can learn something from anyone. Fred shared with me a poignant example of just such a lesson, and I’d like to share it here in closing:

Perhaps the dearest lesson that I received from both my martial arts and university mentors was the importance of honesty and high ethics. If we give no reason for people to trust us, how can we meaningfully function in society? If people cannot be trusted, how can society itself function? There is a saying in kung fu culture, “Once you have dropped a word, even three horses cannot pick it up.” My science mentors further pounded into my head that honestly acquired data and interpretation were the cornerstones of science, and honesty the foundation of all meaningful relationships. Closely behind honesty in ethics was the admonition to use one’s strength to stand up for just causes, be it defending the weak from criminals like my great-grandmaster did in the early 20th century (which earned him the nickname “Uncle Righteousness” from the public) or making sure to fight against disinformation campaigns such as those launched by the anti-vaccine and anti-abortion lobbies. It is not enough to just avoid evil; good, too, must also be done for the benefit of all.

Want to know more about Fred Chu? Check out his personal blog, where you’ll find information about health, kung fu, and more. Fred is also is also pretty enthusiastic about talking about health, diseases, and martial arts any time, so if you’d like to chat with him, find him through Instagram at kungfurubikscube.

If you’re a scientist and you’d like an interview, please either contact the PR department to set up an Interview (PR at Insanitek dot net) or fill out the questionnaire form.

Field trips: A good way to become interdisciplinary in your own field

Teach and Learn the Right Way