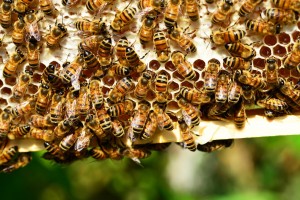 As it turns out, we may have more in common with bees than we previously thought.

New research from a group of researchers from the University of Sussex have discovered that some plants are capable of producing caffeine. In fact, they do so to accommodate bees, which react in a specific way to the caffeine. When they detect it on a plant, they are fooled into believing that it contains more sugar than it actually does. In turn, the bees return to those plants more frequently, according to Voice of America News.

Bees communicate by “dancing,” or moving their abdomens in a certain way. Francis Ratnieks, a professor of apiculture at the University of Sussex, claims that the caffeine increases the bees’ dancing. However, there may be a little bit of a downside to this alteration in the pollination process.

When bees are tricked into believing that there is more sugar in one plant than actually exists, they return to it, even after it’s run dry. Furthermore, their “dancing” influences other bees to visit the plants, which may already be empty.

“Overall, caffeine causes bees to overestimate forage quality, tempting the colony into sub-optimal foraging strategies, which makes the relationship between pollinator and plant less mutualistic and more exploitative,” wrote the authors of the study.

In short, this process may benefit the plant, but not the bees.

This is just one of many studies as of late to highlight alterations to the pollination process — some of which may negatively impact bees. A study recently published in Nature showed that pesticides may be interfering with how bees pollinate plants, according to the Weather Channel.

Neonicotinoids, a common insecticide, is interfering with bumblebees’ pollination. In an experiment on the University of Reading’s Sonning Farm, bees exposed to a “realistic level” of the pesticide seemed to have trouble collecting pollen from apple trees. Additionally, trees that came into contact with the bees produced 36 percent fewer seeds.

“Bumblebees are major pollinators of apples and many crops around the world,” said NigelÂ Raine, a professor at the University of Guelph. “The findings of this study have important implications for both society and the economy, as insect pollination services to crops are worth at least $361 billion worldwide every year, and are vital to the functioning of natural ecosystem.”

Let’s all cross our fingers for the bees’ sake.