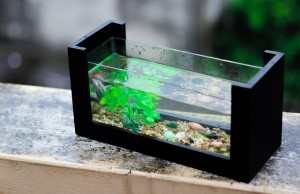 Have you ever wondered where your pet fish lived before you plopped them in your aquarium?

As it turns out, they might’ve come from Hawaii. When the Hawaii Department of Land and Natural Resources recently instituted a new coral reef management plan to address bleaching, animal activists were less than satisfied. This is because about 70 percent of aquarium fish caught statewide come from the Kona coast, and the plan did not address the over-fishing, according to ScienceRecorder.com.

Last month, the State Office of Environmental Quality Control asked for an emergency moratorium on fishing for aquarium collection to be imposed. This did not happen, as seen in the coral reef management plan exhibited to the public.

“We believe that the department needs to go further,” Inga Gibson, the Hawaii state director of the Humane Society, told the Associated Press. “A few months ago the department took the stand to enact an emergency moratorium on the collection of sea cucumbers, and those are taken in much smaller numbers than those fish collected for the aquarium trade.”

William Walsh, an aquatic biologist, told the AP that he believes that the fish taken from the ocean are not the ones that maintain the health of the coral reefs. For this reason, he does not believe a wide ban would have an impact on the condition.

Ruth Gates, coral reef researcher, states that the bigger problem on hand at the moment is the bleaching. Global warming, which has been linked to the coral reef bleaching, is the primary concern to conservationists around the world — not just Hawaii.

Bleaching made headlines earlier this year when it occurred for only the third time in recorded history, according to the Washington Post. Bleaching happens when the ocean temperature warms and coral loses its algae. This results in a loss of nutrients, which can lead to the death of coral.

Scientists believe that approximately 30 percent of the world’s coral population has withered away as a result of above-average water temperatures. Coral disease outbreak is also having a devastating impact on the reefs.

Marine biologists believe that coral reefs are essential to keeping thousands of organisms alive. Many organisms under the ocean thrive within the reefs. However, several experts are already predicting another difficult year for reef preservation come 2016.

Harvey, Chelsea. “Bleaching and disease are devastating the biggest coral reef in the continental U.S.” The Washington Post. October 26, 2015.