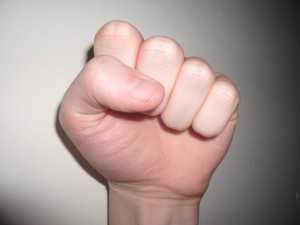 With shootings and terrorist attacks an almost every other day occurrence in the news, one can’t help but ask where is all this hostile activity coming from? While human beings can be very loving and giving, they can also be one of the most violent and volatile species on earth. You don’t have to look too hard into our history to see this. But just maybe those violent and aggressive tendencies are built into our evolution. And according to a recent study, clues to this aggression can be traced to how certain areas of our bodies changed, especially our hands in comparison with our ape ancestors.

When thinking about how humans evolved, it is understandable why Darwin’s theories became widely accepted. And if we focus on how the hand of an ape versus that of man took shape, it’s even clearer. Our ape ancestors moved through the forest from tree to tree by swinging themselves, most likely for food, to quickly move from one point to the next, or as protection from predators, so they had very long fingers. Then the Australopithecus, a species having the characteristics of both an ape and man, appeared and began walking upright. Naturally, this change saw the body structure change and toes on the feet became longer and fingers on the hands grew shorter but with increased dexterity.

Although it is quite an obvious fact, the human hand when compared with that of an ape stands out because of the thumb. The rest of the hand, as scientists see it, is really quite primitive and looks very much like that of the modern monkey. Only when the hand forms a fist does it become something else, a weapon, even though recent studies suggest the force produced is not any more than that of an “open-palm slap.” But even though the human hand evolved enough so that it could forge tools and create fire, scientists suggest that they also became clubs to act out our violent acts, which may have come about as a tool to prolong survival.

With our hands and our instincts we certainly had to learn to survive. Prehistoric man had to hunt, had to fend off predators, and had to carry out a host of other mundane but necessary tasks. But we also learned how to defend ourselves and to fight for what we wanted or needed. These traits are apparent in apes and man, but as David Carrier, a biomechanist, points out; while aggression may occur in ape species more frequently than in humans, human beings are the only ones capable of rape, torture, and group-against-group violence like slavery and, it should be said, mass extermination, which, of course, Nazi Germany perpetrated.

It seems silly to say that men are more prone to violent acts than women. After all, men are supposedly more likely to commit homicide. But all we have to do is turn on the news or read a report on the Internet to see that women are just as guilty of doing violence. According to Carrier, the need for women to defend themselves against rape, to defend their children is another form of aggression, which is a byproduct of our evolution and why our hands took the shape they did. The reason that human beings still have aggression in them today can’t really be explained.

While aggression and the behavior that causes it can’t be fully explained, perhaps those tendencies can be illustrated by how human beings use their hands. Carrier and his team used 8 cadaver arms with fishing lines tied to tendons and secured them to guitar-tuner knobs to apply tension. After a series of punches and slaps, it was revealed that humans use 55% more force than with a slap. The point of this experiment is not to justify human bad behavior but prevent future violence of all kinds, at least that his hope. Seems like a stretch, that understanding aggression in human beings can be prevented. That would require reason, logic and understanding so that these forceful tendencies aren’t brought to the surface. But some answer or at least trying to explore them is better than no answer at all.