Don’t let those hummingbirds fool you. Underneath that tiny, delicate, bejeweled exterior lies the heart of a fierce, angry, territorial bully that is not shy about flashing its wickedly aggressive side. Anyone who has watched humming birds around a backyard feeder can attest to the turf wars, trash talking, pushing and shoving that commonly occurs. There is the soul of a warrior deep inside that tiny hummingbird heart – a heart that beats faster than any other animal’s heart – that want to prove that size doesn’t matter.

Although we can make a case that hummingbirds are mean and cranky because they eat too much sugar, this might not be the full answer. Hummingbirds are extremely territorial and possess excellent memories. They can remember where all the food sources are in their geographical boundaries, as well as retain memories of the quality of the food and when it becomes available. So if you are late hanging out your hummingbird feeders and the tiny birds start buzzing your windows, it IS because they are trying to tell you something. Male hummingbirds are serious about defending the food sources in their territories from other males, female hummingbirds, and other birds and insects. 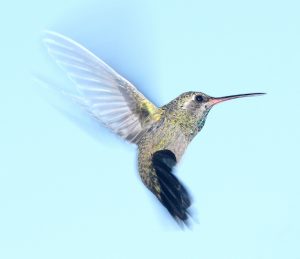 Not surprisingly, the males more aggressively defend their food sources while the females show more aggression near their nests. The hummingbirds are usually the most aggressive in the late spring and early summer because this is when the birds are establishing their territories and guarding their nests. Some hummingbirds, though, seem to have anger-management issues and stay mean and testy well into fall. All hummingbird species have violent tempers but one particular species, the Rufous hummingbird, is the queen of mean.

If a hummingbird feels threatened or believes his food source is in danger, he exhibits his aggression in a number of ways. First, he starts trash-talking. Loud, fast, chattering, buzzing and chirping are all meant to get the offender’s attention and warn him that this territory has already been claimed. The hummingbird will also puff up his gorget, the feathered ring around his throat, in an attempt to look bigger, buffer, and more intimidating. It may also raise the feathers on its crown, or head, lift its tail feathers, spread its wings, and point his long, thin bill at his opponent as if it were a sword.

If these tactics don’t dissuade the invader to leave the area, the hummingbird will take more menacing measures. It will hover in front of the unwanted guest in warning before it flies high up and dives straight down at the enemy, chirping and buzzing the whole way.

Hummingbirds are not above physical confrontations. In fact, fighting happens quite frequently. The dagger-like bills and sharp little talons are its best weapons. They will ram, scratch, and stab at their opponent, often causing serious injuries, or even death.

Hummingbirds are built for aerial warfare. Unlike most other birds, hummingbirds can fly backwards and hover in place, and can reach speed of up to 60 miles per hour.

The beak of the hummingbird is long and thin, ideal for reaching nectar hiding deep in a flower, but also perfect for combat. In fact, one species of hummingbird, the Long-billed hermit hummingbird, or Phaethornis longirostis, seems ideally suited for warfare. Adult males have beaks that are much longer, stronger, and sharper than the females, and even the juvenile males of the species.

Female hummingbirds may find this smoldering rage and open hostility to be a favorable quality in a mate, some studies have shown. The higher levels of testosterone equates to more mating success. Perhaps it is because being able to successfully defend a food source is an admirable quality in a male, therefore females are attracted to the male who is best able to defend them.

The tiny hummingbird’s disproportionate confidence is the stuff of legends. YouTube is home to several videos depicting the David-like hummingbird in victorious battle over Goliaths such as hawks, eagles, and owls. These confrontations are much older that the popular internet video sharing website. Take the Aztec legend, for example, and we will see how the ancients looked beyond the bird’s diminutive size and focused on its prowess as a warrior.

The Aztec god of war and the sun, Huitzilopochtli, is depicted as either an actual hummingbird or as a warrior sporting a helmet of hummingbird feathers. The high priests of the Aztec people would cut out the still-beating hearts of their enemies or sacrificial slaves as a way to honor and feed the hummingbird god. The Aztecs could be assured of victory in battle as long as Huitzilopochtli was kept well-fed and happy. Aztec kings believed they were connected to the gods in a uniquely royal and privileged way and they demonstrated this by wearing cloaks made entirely of hummingbird skins. Birds who weight about as much as a nickel don’t have a lot of surface area. It has been estimated that it would take in excess of 8,000 hummingbirds to make an adult-sized royal cloak from the shimmering, feathered skin, but it must have been a sight to behold.

It cannot be denied that the hummingbird suffers from an incurable, acute, Napoleonic complex. Ornery and aggressive, the hummingbird can unleash its sugar0fueled rage on birds that are much larger, demonstrating to the animal world that size really doesn’t matter.