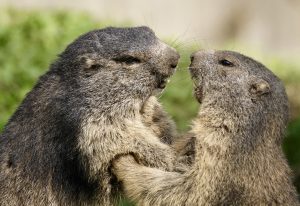 Recently, a team of biologists set out to determine exactly how the social behaviors of marmots impact their health. They looked at 66 adult female marmots between 2002 and 2015 at a lab in Colorado to gauge their results. The marmots were observed for a maximum of six hours a day, without any influence from humans.

“More social marmots are less likely to survive over the winter, and they live shorter lives, on average,” said lead author Daniel Blumstein, UCLA professor of ecology and evolutionary biology. “We’re finding costs for adult female marmots to be nice to other female marmots. This species of marmots is not highly social, and for them, it seems costly to interact with others.”

On average, the researchers determined that the “less social” marmots lived an average of two years longer than their counterparts, but why?

As it turns out, the biologists believe that “social” marmots are more likely to be exposed to diseases from parasites. In addition, they are more likely to face competition from their “friends” when it comes time to search for food and the supply is scarce.

Humans and the Need for Socialization

Marmots may not fair well when they make friends, but what about humans? As it turns out, previous research suggests that humans actually need regular interaction with each other in order to live a healthy, well-rounded life.

Researchers Lisa Berman and S. Leonard Syme drew these conclusions after studying 7,000 men and women to learn more about the impact of their social behaviors (“Social Interaction is Critical for Mental and Physical Health,” 2017). Over the course of nine years, they concluded that those who were “disconnected” from others were three times more likely to die, compared to their counterparts.

It’s worth noting that this is just one of many studies to suggest that humans thrive through their social interactions. Another study published in 1984 found that among 2,320 men who had survived a heart attack, those with strong connections to other people only had a quarter the risk of death within three years, compared to the less social survivors.

Whether you’re a social butterfly or an introvert, the science speaks for itself.

Wolpert, Stuart. “Can being too social take years off your life? Yes, biologists report, if you’re a marmot.” Retrieved January 23, 2018, from https://phys.org/news/2018-01-social-years-life-biologists-youre.html.

Do Your Friends Really “Get” You? Our Brains Say Yes