What happens when you primarily consume fast food? According to multiple reports, this is the diet of the U.S. president, and he is evidently one pound away from being considered obese by the Centers for Disease Control and Prevention.

Recently, President Trump underwent a physical by Navy Rear Adm. Dr. Ronny Jackson. The results showed that he was 6 feet 3 inches tall and 239 pounds. Despite being one pound away from obesity, Jackson said that Trump’s health was overall “excellent (“WH doctor credits ‘good genes’ for Trump’s excellent health despite fast food diet,” 2018).” 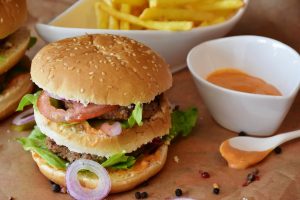 “You know, I told the president that if he had a healthier diet over the last 20 years, he might live to be 200 years old,” Jackson said in a White House press briefing. “He has incredibly good genes, and it’s just the way God made him.”

Staffers for the White House say that President Trump regularly enjoys McDonald’s, Diet Coke and Kentucky Fried Chicken. While Jackson said that he could stand to lose up to 15 pounds through exercise and an improved diet, he is still in good health – so could the average American follow the same diet and see similar results?

Fast Food and the Immune System

One reason why you may not want to try the president’s diet is because of the results from a new study, which suggest that fast food ultimately makes the immune system more aggressive in the long-term.

To gauge their results, a group of scientists from the University of Bonn looked at mice exposed to a “Western diet” consisting of food that is high in sugar and fat, and low in fiber (“Fast food makes the immune system more aggressive in the long term,” 2018).

“Genomic studies did, in fact, show that the Western diet had activated a large number of genes in the progenitor cells. The genes affected included those responsible for proliferation and maturation,” said Prof. Dr. Joachim Schultze from the Life & Medical Sciences Institute at the University of Bonn and the German Center for Neurodegenerative Diseases.

Even after removing the mice from the “Western diet,” their genes remained “switched on” from when they had been activated from the fast food phase. These results suggest that the immune system can not only be impacted by fast food, but the food can have a lingering effect, long after the food is gone.